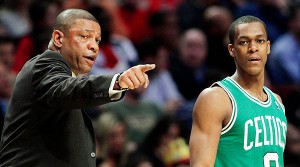 It’s no secret that Rajon Rondo’s relationship with Ray Allen was part of the reason Allen decided to head to Miami. The word on Rondo is that he’s tough tough to deal with and has an ego. You’d never be able to tell based on how unassuming he.

But the first step of recovery is admission. Rondo has admitted that he’s tough to deal with. In fact, he’s acknowledges that he’s difficult to coach in a recent interview. I wonder if this is why Doc Rivers has been non-committal on returning as Celtics coach for what seems like every offseason.

Brian Kamenetzky: “Do you think you were hard to coach earlier in your career?”

RR: “I still am. It’s not that I’m hard to coach; it’s just that I may challenge what you say. I know the game myself. I’m out there playing, so I may have seen something different versus what you saw from the sidelines. I’m going to be respectable. I’m going to let the coach talk. Me and Doc talk all the time; it’s just different dialogue. We’ve built to that relationship, and I’ve been fortunate to play for Doc for seven years. If I have any questions, he’s pretty much got all the answers. And if he doesn’t, he’s always honest with me. I wouldn’t rather play for any other coach.”