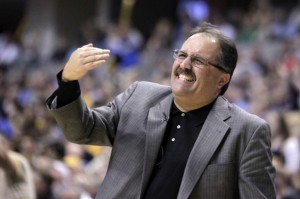 Once the darling of college basketball, John Wall hasn’t quite had the same sort of success in the NBA. Granted, he has never played on a good team in Washington, many feel as if his individual play should be better than what it is. One of those people just happens to be Stan Van Gundy, who is probably the first person to go public with such a harsh criticism of Wall. At this point of Wall’s career, it’s hard to argue against Van Gundy. Let’s see if that changes.

“You know, I don’t see it, to be honest,” Van Gundy said. “I’d love to tell you you’re two years away; I really don’t [see it]. That roster doesn’t make a lot of sense to me. I know they’ll be better when John Wall comes back. He’s certainly got talent, but I don’t know that even John Wall is a great player to build your franchise around. I don’t know WHO you’re building around, so it’s tough to even think about what the construction of your team is. That’s just a bad basketball team.”

“I think maybe they thought it was gonna be John Wall – maybe they still think it is. I think there’s a lot of people in the league – I’d certainly be one that would share this opinion – I don’t think John Wall’s good enough to be the guy that you build around. I think he’s got great speed and quickness, but point guard is a decision-making position. That’s what makes you great as a point guard, is your decision-making. I haven’t seen any indication that John Wall is a great decision-maker.”