Video: DII Player’s 360 Dunk Over a Motorcycle At Midnight Madness 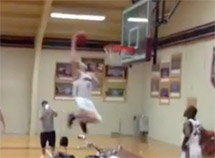 We’ve seen quite a few outlandish dunks over the years during  college basketball’s annual Midnight Madness festivities that officially signal the beginning of each NCAA hoops season.

Some of the more memorable high risers included University of Indiana freshman Victor Oladipo jamming it over 8 people back in 2010, University of Maryland 7 foot center Alex Len doing cartwheel dunks last season, and even the 5’11 Jacob Tucker from a tiny DIII school that parlayed a viral dunking video into not only participating but winning the 2011 NCAA Dunk Contest.

But we now can include another small school player into the most memorable Midnight Madness dunker list as Tristan Shore, a 6-foot-4 sophomore at Division II’s Clearwater Christian College, has somehow pulled off a 360 jam over a Harley Davidson motorcycle as the highlight of Cougar Midnight Madness.