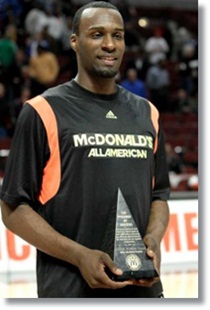 For the past 35 years, the very best high school hoops stars have come together for the annual McDonald’s All American Game. The game has helped catapult the careers of a myriad of future collegiate and NBA stars like Shaquille O’Neal, Lebron James, and most recently Jared Sullinger.

Just a a day ago, Muhammed, a 6‘6 high scoring SF, won the annual McDonald’s Dunk Contest, then took home McDonald’s All American Game MVP honors for being the event’s high scorer with 21 points. Muhammed remains one of the most sought after still undecided players in the 2012 Class.

University of Kentucky recruits SF Alex Poythress, who already has a monster 46 point and 18 rebound game to his credit and elite level SG Archie Goodwin both showed Big Blue Nation a glimpse of how talented next season’s freshmen will be by dropping 19 points and 14 point respectively.

The super stacked West squad led by Muhammed, prevailed over the East by a score of 106-102. The East was led by Poythress, along with UCLA recruit Kyle “Slo Mo” Anderson’s near triple-double (13pts, 8reb, 8ast, and 4stl), Rodney Purvis’ (NC State) 15pts, and DaJuan Coleman’s (Syracuse) 7 pts and 12 rebounds.