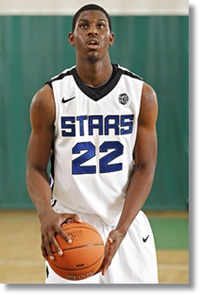 After a slow start to in the early recruiting period, the NBA’s best recruiter, Kentucky coach John Calipari, has once again reeled in a trio of elite level superstars led by Archie Goodwin, Alex Polythress, and Willie Cauley, that will grace the hardwood at Rupp Arena as the newest crop of fabulous freshmen.

Following in the footsteps of this year’s outstanding freshmen class (Gilchrist, Davis, Teague, and Wiltjer), Goodwin is a Top 20 rated combo guard in the mold of Tyreke Evans, the 7 foot Cauley is an elite level shot blocker that also excels on the gridiron, and SF Polythress, who is as athletic as any player in the country, projects as a one-and-done player as an elite level scorer.

Polythress chose the Wildcats over a number of top notch Division I schools like Duke, Florida, and Memphis. He is described as a terrific long armed athlete that does a great job running the floor and attacking the basket on the break and in the half court. He can hit the open three with time and space but he is at his best when getting to the rim, preferring to dunk on opposing players.

After starring for the Georgia Stars AAU squad this Summer alongside fellow Top 20 rated big man Tony Parker, Alex has taken his offensive game to another level in his senior season at Northeast HS in Clarksville, Tennessee as he has already notched numerous 30+ point games in the early going.

He set a career high in scoring 47 points in a game just prior to Christmas, and recently had the best all around game of his young career, consisting of 46 points, 18 rebounds, and 7 blocks in a 3rd round game of a local Above the Rim Tournament.

Assuming that Michael Kidd-Gilchrist declares early for the 2012 NBA Draft, as he is already projected as a Top 10 pick, Polythress should slide in nicely at the 3 for Big Blue next season.

Check out Alex Polythress at the 2011 Lebron James Skill Academy: