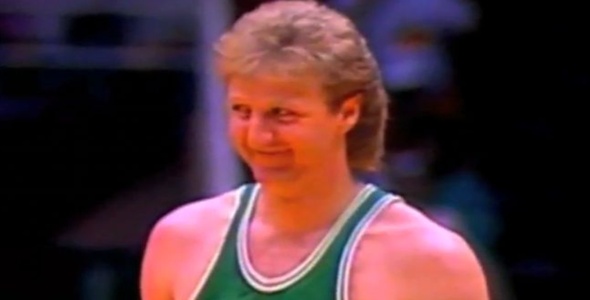 Do you long for some great throwback NBA and NCAA footage of superstars of the past featuring some of the game’s players?  Do you miss watching games in which the jump shot was an art form and not an afterthought?  Longing to see some of the hardwood’s greatest grudge matches of teams wearing some of the league’s ugliest uniforms?  If you are a fan of the game from back in the day, this is the series for you.  Welcome to Vintage Video.

Back in the 80’s, Larry Bird and Xavier McDaniel could talk trash with the best of them. At the time of this clip, McDaniel was a trash talking, intimidation machine, only a few years removed from becoming the first player in NCAA history to lead the college ranks in both scoring and rebounding at Wichita State University. As the 4th overall pick in 1985, McDaniel finished 2nd in the Rookie of the Year voting to eventual winner Chuck Person of the Pacers. He became part of the NBA’s highest scoring trio in the ’86-87 season along with Dale Ellis and Tom Chambers, as a first time 20 ppg scorer. 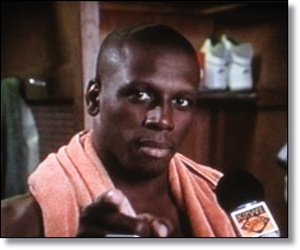 He would eventually would go on to star for the NY Knicks under coach Pat Riley during the 90’s. Riley’s rough and tough play during the Jordan era fitted McDaniel perfectly as he was one of the league’s most intimidating players, annually ranking near the top of the league in technical and flagrant fouls. He gained notoriety by shaving his head and eyebrows to look even more menacing, earning the name “X-Man.” During the ’87 season, he even was involved in a pre-cursor to the Sprewell/Carlesimo choking incident years later when he tried to choke out an opposing player, Wes Mathews during a game with the LA Lakers.

So when he turned his focus to Larry Legend on the Celtics, Bird couldn’t resist showing up the player whom was universally known as one of the dirtiest and disliked players in the league. Although to some, Larry Bird had a much different reputation, he could also talk trash with the best of them, except that unlike most of the trash-talkers, he could more times than not, back it up.

In the video, Bird and McDaniel were going at it all game, with McDaniel’s Celtics leading by 1 point with 13 seconds remaining. Celtics coach KC Jones called a time-out, when Larry Bird took over the huddle. He basically told the other players to give him the ball and get out of the way, because he wanted to teach McDaniel a lesson. Before the ball was in-bounded, Bird told McDaniel that he was going to get the ball and shoot the game winning shot right from the spot Xavier was standing. Typically, McDaniel responded that,” he would be waiting for him.”

Judging by Bird’s reputation, you can guess what the outcome was; Bird doing exactly as he told McDaniel, nailing the shot. In a later interview about the play, Bird’s only misgivings about the events was that he took and made the shot with 2 seconds remaining. He wanted to nail the game-winning jumper as time expired! Typical vintage Bird.