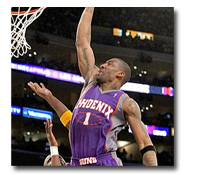 If you are on EST, you may have missed the late game last night between the Suns and Warriors. As expected with any Suns/Warriors game for the past 4 years it was a shootout. Phoenix barely squeaked out the win against Golden State 133-131, and had to overcome some crucial missed free throws late in the game to do so.

The win was partly attributed to a huge late game Amare Stoudemire bang on Warriors Anthony Tolliver. Quote of the day on the play comes from the blog ‘Sports Rubbish’ who says “Amare threw that down on Tolliver so hard that he will be picking pieces of the ball out of his children’s teeth.”