Breaking Down the Ballot: All-Star 2010 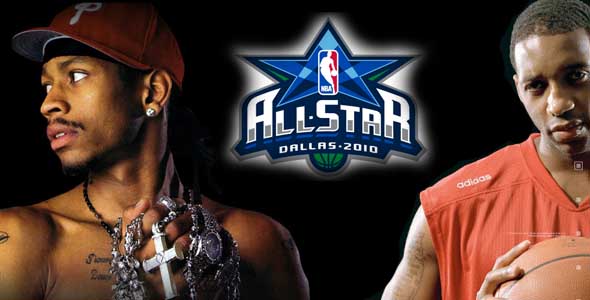 It is the New Year and that means the 2010 NBA All Star Game is right around the corner (February 14 at Dallas Cowboys Stadium) and I have what should be the roster for both conferences and I am questioning what you silly fans are thinking.

As of the first day of 2010, Allen Iverson, Tracy McGrady, and Kevin Garnett would be starting for their respective conferences, which is totally sad and makes me think twice about how much the average NBA fan is paying attention.

It seems the entire nation of China is a few years behind the NBA curve and still thinks Tracy McGrady is a competent NBA player, hence his Western Conference leading votes.

Being Yao Ming’s teammate has its benefits (money and apparent All Star votes) and it looks like the Republic of China has taken a liking to T-Mac, while his home country has abandoned him.

T-Mac has not been an All Star caliber player since 2008, when he last averaged over 20 PPG and played in over 60 games. His being named to the All Star game this year would be extremely sad since he would make it over a much more deserving player. McGrady is only averaging 7 MPG and 3 PPG in six games played, ouch.

The days of Allen Iverson being an All Star player also ended in 2008 when he played in Denver. It was the last time The Answer averaged over 20 PPG and AI is not even the best AI on this Philly team and is nowhere near an NBA All Star anymore.

Kevin Garnett has not been an All Star since his days in Minnesota and it is because of two things: his talent has been on the decline, and he has conformed to the team game Boston plays. This is not a knock on Garnett as this is obviously what has been necessary to be part of a winning team, but his days of carrying his team and being considered an all-star should be behind him.

KG averages 15 PPG and 7 RPG, and you want to know who else averages that? Yi Jianlian, a player that would never get All Star votes! Andrew Bynum also averages 15 and 7 and is known to be struggling this season.

It is obvious and apparent Iverson, Garnett, and McGrady are not All Stars and if you silly fans keep voting for them, they will sadly make the All Star team over players that deserve the spot a lot more than declining or washed up veterans.

For instance Monta Ellis is averaging 26 PPG, 4 RPG, 5 APG and has scored 30 points in 6 of his last 8 games but will probably not make the team because Tracy McGrady will undeservedly take his spot and bonus money.

As of right now, the Western Conference Starters look like this, according to the fans:

But it should look like this, according to me …

Dirk Nowitzki is having an MVP type season and therefore it is ridiculous that he and another MVP candidate, Chris Bosh, are not starting for their respective conferences.

Kevin Durant better make the All Star team or I might consider a boycott. I have already discussed why Monta Ellis should be an All Star but will likely not be one.

I also selected Chris Kaman to my All Star team, but I do not think he will make it because his numbers are too good, it makes too much sense for him to be on the All Star team, and he does not jump high enough.

I have three Memphis Grizzlies just barely off the list and I was shocked to see how good all three were playing. The Griz are surprising a lot of people this season and so are Marc Gasol, Zach Randolph, and Rudy Gay but I will be shocked if the NBA selects them.

All three players are playing like All Stars but I do not think they will make it because there are only 12 spots. If the team were 15 spots, which also makes too much sense (expanding the rosters), then Memphis would definitely have a representative.

I snuck Pau Gasol in the “Just Missed” list because the Lakers are the best team in the world and they might need two players just because.

Tyreke Evans is going to win the Rookie of the Year award and would be an All Star if the league did not have so many great players. Sorry ‘Reke, you are not going to make it over Paul, Nash, Ellis, Williams, or Roy.

The Eastern Conference starters currently look like this, according to the fans:

First off, there should be two Boston Celtics named to the All Star game and their names are not Kevin Garnett, Rasheed Wallace, or Ray Allen; they should be Rajon Rondo, who should start at PG, and Paul Pierce, who should come off the bench.

Secondly, why is Chris Bosh not starting?! It makes no sense and if you voted for KG, you are either a Celtics fan or you have not watched an NBA game in three years. Not only is Chris Bosh playing amazing again this season, but the All-Star game is in his home state of Texas. Give the man some love!

We have already discussed Allen Iverson and I am very proud to have three Atlanta Hawks on my bench. I think the Hawks are a great team, possibly better than the Celtics and Cavs and their three All Stars are the reason why I believe that.

Al Horford, Josh Smith, and Joe Johnson are three of the reasons why ATL is only 2.5 GB of the division leading Orlando Magic and I think all three should make the All Star team but I will be surprised if one makes it because it makes too much sense for them to be on the All Star team.

Brook Lopez plays for the worst team in the NBA but that has not deterred him from having a great (All Star) season. Lopez scores more PPG, dishes out more APG, and shoots better Free Throws than Dwight Howard; I am not saying he is better than Howard but Brook is definitely an All Star.

Gerald Wallace is third in the NBA in rebounding and is one of 13 players averaging a double-double on the season. Philly’s Andre Iguodala is the best AI on the Sixers and he is also in the running for Team USA 2012.

Joakim Noah is having a great season, 2nd in the NBA in rebounding and averaging a double-double; Brandon Jennings will finish 2nd in the ROY race; Danny Granger would be an All Star if he did not get hurt; and David Lee might make the All Star team but he would definitely snub a player better suited.

Luol Deng is having a great year coming off an injury, averaging nearly 18 PPG and 8 RPG (both better than Kevin Garnett) but I will be very surprised to see Deng as a 2010 All Star.

I think NBA fans think that the All Star voting is a joke. This is obvious as the joke is KG, AI, and T-Mac being considered as All Stars. Their careers are on the decline and it is time for the NBA to pass the baton much like MJ did ten years ago.

I know the fans think the All Star voting is fun but I know the NBA players that make hundreds of thousands of dollars in bonus money for making the team do not think it is funny when they are snubbed.

Who do you think deserves to start in the East and West?