Does Sheed Make Boston the Team to Beat?

admin July 9, 2009 Blogs 6 Comments on Does Sheed Make Boston the Team to Beat? 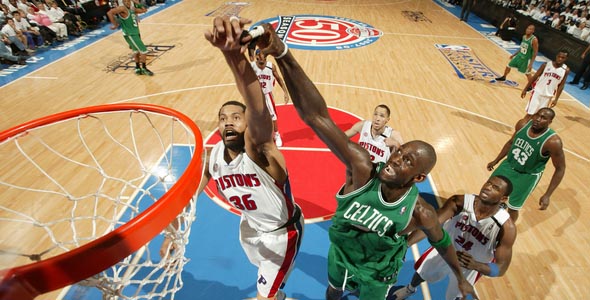 By the time the Boston Celtics walked off the parquet floor after a disheartening Game 7 loss to Orlando in the Eastern Conference Semis, the NBA world had seen the glaring weaknesses that plagued the former defending champs. The obvious weakness that everyone pointed at was the fact that Kevin Garnett was walking off that same court in his Sunday best instead of a #5 jersey due to a knee injury that Jesus would’ve apparently had a difficult time healing without conducting surgery.

But their issues went much deeper than that. The bench, which had been inconsistent all season long, went MIA throughout their first round series against Chicago and was spotty at best against the Magic. Their lack of a backup big was clearly visible whenever Kendrick Perkins was taken out of games. Leon Powe, the main significant post presence off the bench, ripped up his knee early in the Chicago series. Brian Scalabrine was useful at times from the perimeter but he couldn’t play offensively or defensively down low, while Mikki Moore was a waste of space as he racked up four DNP-CD’s during the two series and was utterly ineffective when he was actually put into a game.

The major problem was the defense. The bread-and-butter of the Celtics’ championship run just one year prior became their Achilles’ heel and was a massive contributor to their downfall. The absence of KG’s length and athleticism created problems with Boston’s defensive spacing and their ability to switch off on pick-and-rolls. In 2008, they were a prime example of the motto, “Offense sells tickets, but defense wins championships.” In 2009, they showed that it actually does work both ways.

So the Celtics went out to the free agent market and filled all these holes. And they only needed to sign one player to do it. Rasheed Wallace.

Sheed’s arrival in Boston will bring a much-needed spark to a bench that couldn’t find any kind of chemistry, groove, or identity throughout the season. He will probably play about 20 to 25 minutes a game, maybe more if Perkins gets into foul trouble. His presence will take a ton of pressure off of the starters and, more importantly, Doc Rivers, who is a huge advocate of regulating his players’ minutes.

Wallace will also bring some versatility to a team that doesn’t have much of it, especially from their big men. Scalabrine is a perimeter player with no inside game, Perkins is a post player with no outside game, and Moore is a stiff. Wallace can do whatever the C’s need him to do on the offensive side of the ball. He can play down low against just about any half-court defense and hit his sweet fade-away, he can jump outside and hit from the perimeter on a consistent basis and he can trail on a fast break when opposing bigs are defending in the paint and drain 3’s from the top. Imagine being the opposing coach having to devise a defensive game plan in the 4th quarter of a tight game against a play making point guard in Rajon Rondo, a shooting guard that can hit it from anywhere in Ray Allen, a superstar that’s been closing out games his entire career in Paul Pierce, and two bigs that both have great inside-outside games in Wallace and Garnett. That’s why those coaches get paid the big bucks.

But the biggest thing Wallace brings to Boston is a team-first, defensive-minded attitude. For all of the antics that he pulls and the attention that he draws to himself, Wallace is one of the most unselfish players in the game and is a very good low-post defender. His length allows him to block shots and gobble up rebounds, while his high basketball IQ allows him to go where he needs to be on defense, something that will help him with his transition to Boston and in learning the team’s defensive strategies. Sheed’s presence, along with Garnett’s return, makes the strength of the Celtics even that much stronger and it is highly possible that this team might have a better defense than the 2008 championship team.

Although the summer is still young and some big names are still on the market, this move seems to be the best fit for both the player and the team. The Celtics probably need to sign another big and a backup point guard during the off-season to strengthen their roster and tie up any loose ends, but this move solidifies them as serious title contenders for the next few years and it looks like it might not be very long before the city of Boston watches as the 18th banner rises to the rafters of the Garden.