Rumor: Lakers, Clippers and Knicks All Plan to Make a Run for Kevin Durant in 2019 Free Agency

admin October 18, 2018 Rumors No Comments on Rumor: Lakers, Clippers and Knicks All Plan to Make a Run for Kevin Durant in 2019 Free Agency 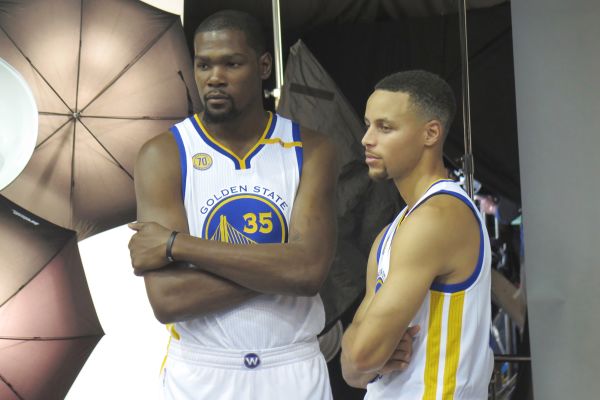 If Kevin Durant wants to run his own show after (probably) winning three straight titles with the Golden State Warriors, he won’t have any shortage of suitors pining for him to be their leading man.

There’s an element of “Well, duh!” to this statement. Every team will want to sign Durant if he declines his player option, including the Warriors. But some of the league’s biggest, brightest markets are going to have cap space—namely all four teams in the Los Angeles and New York areas. And three of them are already planning to make a run at Durant, according to Yahoo Sports’ Chris Haynes:

Personnel from the Clippers are expected to attend a high number of Warriors games this season, sources said.

Rival executives are of the belief that Durant, unlike the previous two summers he hit free agency with the Warriors, might be swayed to leave the Bay Area this time around.

Allow me to eliminate the Lakers right here and now. The idea of Durant teaming up with LeBron James makes sense if he wants to be the one to immediately tear down the dynasty he helped build. But the whole point of him leaving the Warriors would be for him to go out on his own. Syncing up with LeBron doesn’t exactly permit him to do that.

The Knicks, in fact, might be the best option if he’s looking to avoid any overlap whatsoever. Los Angeles is now, in a way, LeBron’s town. The Clippers play in it. The Knicks are already the toast of New York, and they’re working on a championship drought that spans nearly five decades. If Durant were to end that, he’d be immortalized in ways neither the Lakers nor Clippers nor even Warriors could promise.

With all that said, let’s slow our roll. The Warriors have played one game. A lot can and will happen between now and July. Durant himself probably doesn’t know what he’s going to do.