Ginobili Basically Forced Coach Pop to Play Him vs. Knicks

admin November 3, 2015 Blogs No Comments on Ginobili Basically Forced Coach Pop to Play Him vs. Knicks 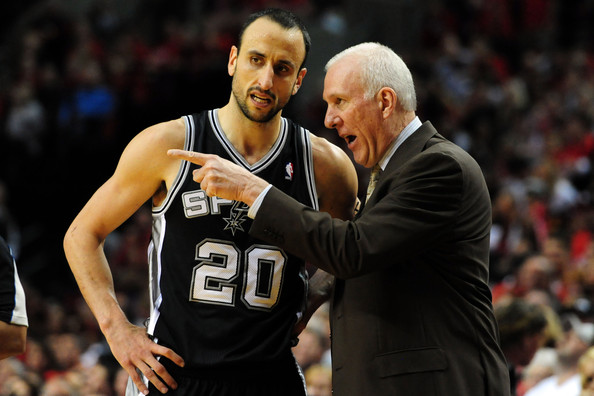 Well, not really. But he has the ability to change Coach Pop’s mind.

Popovich apparently had plans to sit Manu Ginobili against the New York Knicks on Monday night, a move he thought that Ginobili agreed to. As it turns out, Coach Pop was wrong, so the Argentinian took matters into his own hands.

From the Associated Press (via NBC Sports):

Gregg Popovich’s plan to give some rest to one of his veterans hit a snag.

Chalk it to Manu Ginobili‘s persuasion. Or blame the “bunch of cowards” Popovich has for assistant coaches.

Either way, Ginobili was set to play for the San Antonio Spurs on Monday at New York on the second half of a back-to-back.

The Spurs won in Boston on Sunday and Popovich says he told the 38-year-old Ginobili he would sit out Monday, following a plan he says they discussed earlier this season.

Popovich says Ginobili didn’t recall agreeing to the plan, and when Popovich grew tired of the player’s lobbying, he told the Argentine star to discuss it over breakfast this morning with the Spurs’ six assistants.

Popovich says when the meeting was over, Ginobili was playing.

But Popovich adds that he controls the playing time, so Ginobili will “play like three minutes a half.”

Well, Ginobili played on Monday. And in yet another display of how overstated Popovich’s influence really is, the 14-year veteran didn’t just play three minutes per half, or only six minutes total. He nearly tripled that, logging just over 17 minutes of burn.

Now, to be fair to Popovich, the 38-year-old Ginobili might have been better off accepting his rest day. He did shoot 3-of-5 from the floor, in addition to dishing out three assists, but in a game the Spurs won by 10, Ginobili was a minus-6, earning the team’s worst plus/minus score.

Ah, well. The Spurs won. And so did Ginobili.