admin May 10, 2015 Allen Moll, NCAA No Comments on Watch: Is Dennis Smith Jr. The Next Kyrie Irving? 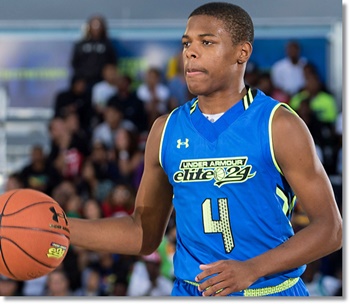 The 2016 high school class is filled with tons of potential superstars at the college and pro levels, especially from the guard position, as players like Malik Monk, Kobi Simmons, and Terrence”2K” Ferguson have been blowing up the internet with highlight reel dunks.

But the player, regardless of class, that has impressed the most this past season has been electrifying floor general Dennis Smith Jr, who is already drawing comparisons to former NBA Rookie of the Year Kyrie Irving, for his amazing scoring prowess and advanced basketball IQ at such a young age.

The 6’3 athletic freak is a Fayetteville, North Carolina native that played for Trinity Christian HS this past Winter and stars for Team Loaded on the AAU circuit.

He has been tearing it up at the EYBL in Dallas and the Adidas Rising Gauntlet this past weekend in Indianapolis, averaging 18 points, 7 assists, and 2.3 steals in front of Division I coaches like Mark Gottfried of NC State and Roy Williams of North Carolina.

As one would imagine, the nation’s top ranked point guard is being recruited heavily by most if not all high major programs like Duke, North Carolina, Kentucky, Arizona, and Kansas, but experts believe he’s leaning towards either Louisville or NC State.

State is a frontrunner because highly touted teammate Shaun Kirk recently committed there and Louisville is currently in the mix because of a friendship between Smith Jr and former Cardinals guard Terry Rozier.

Smith has dynamic athleticism and a composed, mature grasp of the point guard position. He reminds most of a young Kyrie Irving with his all around scoring and point guard play but is a much more explosive, dynamic athlete as a high school junior.

He has a legitimate shot at finishing as the top ranked player in the 2016 Class with a stellar senior season, along with big men Jason Tatum, Harry Giles, and Josh Jackson.