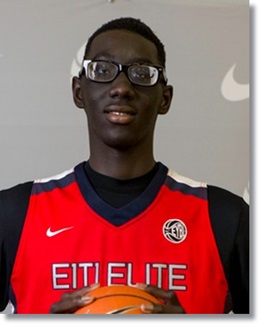 Last season, the nation started to take notice of 7’5 high school player Tacko Fall, as he literally towered over and dominated most of the competition.

He has has an amazing journey, beginning halfway around the World in Senegal, to now earning a NCAA Division I scholarship to the University of Central Florida, playing high school ball in Florida.

On the opening day of the 2014-2014 high school season, coincidentally the same day he committed to UCF, Fall had an incredible opening night that would impress on any level, dropping an eye popping triple-double consisting of 27 points, 13 blocks, and 10 rebounds.

Standing 7’5, he is officially in the books as the current tallest high school player in the World.  And despite looking a bit stiff and lacking elite athleticism, Falls could be a legit NBA prospect following his freshman season at UCF, making him eligible for the 2016 NBA Draft.

The Association has seen a handful of players at or above Fall’s size play a major roll for their squads like Gheorge Muresan, Manute Bol, and Shawn Bradley over the years, but few outside of Yao Ming(7’6) have been All Star caliber players.

It remains to be seen where Falls will wind up once his skills and hoops acumen fully develop but he’s definitely off to an amazing start to his senior HS season, like dropping 44 points and 17 boards in a single game at the High School OT.com Invitational over Christmas and New Years.

Could Tacko Falls become the NBA’s next larger than life player?