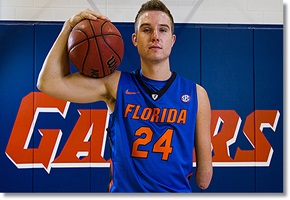 Last August, THD was one of the first to bring you the story of one armed hoops star Zach Hodskins, who in an inspirational twist was offered a preferred walk-on spot with the Florida Gators.

Hodskins should be an inspiration to everyone following overcoming a birth defect that robbed him of not having any part of his arm below the left elbow.  He starred at HS powerhouse Alpharetta Milton HS in Georgia despite his disability, prompting coach Donovan and staff to offer the 6’4 and 205 lb guard a walk on spot.

We haven’t heard much since the offer was made at the end of last Summer, that was until last Friday, as the #8 ranked Gators took on William and Mary to kick off the 2013-2014 NCAA season.

Florida won is easy fashion, despite not having the services of suspended star forward Chris Walker, but what was most impressive was the 2 minute debut of freshman Zach Hodskins at the end of the 1st half.

Although he didn’t score any points vs the Tribe, and didn’t see the court Monday in Florida’s upset loss against Miami, Hodskins’ story should be one of the feel good moments of the season so far, especially with everyone seemingly focused on academic scandals, players getting paid, and early season bracketology.

Zach reminds us that anything is possible if we put our minds to it…..