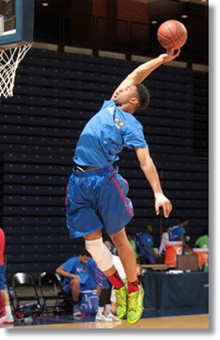 For those in the younger generation, the current 3 point shooting, role player version of Vince Carter is a shell of his former self that once was in the same discussion with Dr J and Michael Jordan, as the most athletic and freakishly amazing dunkers in NBA history.

Just Google that amazing 2000 NBA Slam Dunk Contest or his now legendary jaunt over 7 foot Frenchman Frederick Weiss in the 2000 Olympic Games in Australia and you will surely get the picture.

His dunking prowess earned him the nicknames “Half Man, Half Amazing”, “Air Canada” from his time with the Raptors, and my personal favorite “Vincesanity.”

But as Carter winds down his borderline Hall of Fame career, this season with the Memphis Grizzlies, one amazing youngster in the high school ranks is beginning to draw comparisons to Vince for his unreal hops in the state of North Carolina.

The 6’5 inch Tucker has made a name for himself this Summer on the Under Armour AAU circuit, playing for Team Charlotte, who is coached by former UNC standout and NBA vet Jeff McInnis.

He amazingly gave up the gridiron for full time hoops just over 2 years ago and has developed into one of the top players in the 2015 recruiting class, showing a freakish ability to finish way above the rim and appearing to jump off a pogo stick.

No doubt, UNC Tarheels’ Coach Roy Williams will have some major interest in this homegrown North Carolina talent.  Check out his unreal Summer mixtape…