Lance Stephenson Owns Up to Ejection Vs. Heat

admin March 28, 2014 Blogs No Comments on Lance Stephenson Owns Up to Ejection Vs. Heat 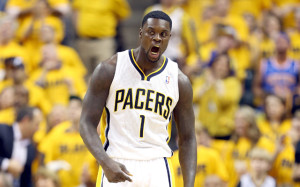 Careful now. Your eyes are going to start burning.

The light you’re seeing is too bright.

And it’s coming from Indiana Pacers guard Lance Stephenson, whose continued development has gone from gradual and progressive to absolutely blinding.

Already a threat on both ends of the floor as a tough perimeter defender, illustrious scorer, incredible rebounder and talented playmaker, Stephenson can now add “functioning adult” to his NBA resume.

Stephenson was ejected in the fourth quarter of Indiana’s 84-83 victory over the Miami Heat Wednesday night, after taunting Dwyane Wade. A video of the incident can be seen below:

First thing’s first: What kind of power does Wade have over the referees? What dirt does he have on them?

After Stephenson said whatever he said—my guess is he wasn’t making dinner plans—Wade smirked, then gestured to the referees, pleading for Indiana’s colorful guard to be ejected. Lo and behold, Stepenson was ejected.

Having already received one technical for a previous skirmish with Wade, Stephenson was canned at a crucial point of the contest. Had the Pacers lost, head coach Frank Vogel and Stephenson’s teammates wouldn’t have been happy. They still weren’t happy even after they won.

But they did win.

And Stephenson showed remorse one day after the incident, per the Indianapolis Star‘s Michael Pointer:

“I definitely can’t do things that cost us games and let my teammates down,” Stephenson said. “I’m a big factor to the team. Getting kicked out of the game last night was my fault and not being a pro.”

Stephenson’s family lives in Indianapolis and he said he spent four hours talking to his father about it afterward.

“My Dad said, ‘You can’t make that happen,’ ” Stephenson said.

Maybe a little parental pressure will get a message across that Pacers officials have been trying to instill Stephenson in his nearly four years with the team. It’s been especially crucial this season, in which he’s emerged as a vital ingredient to their success.

Let’s not get in the habit of handing out awards for apologies that needed to happen, but ask yourself this: Does Stepehson make this “apology” one year ago? Six months ago?

Long considered a temperamental prospect brimming with talent and self-destructive tendencies, Stephenson has, for lack of a better phrase, grown up. Forget the per-game production. While most definitely impressive, it’s not everything.

Veterans and level-headed NBA players can own up to their mistakes, waxing regret for things they’ve done, for moments that got the best of them. That’s what Stephenson is doing here, and the lesson he learned appears genuine.

Though this is still a matter of seeing if Stephenson can implement what he now knows, making it a standard part of his game and persona, it’s tough not to smile at how far he’s come. He’s never going to be a stiff out there, emotionless and expressionless, but he’s coming closer to finding that balance between demonstrative and under control.

For the Pacers, it’s a good thing. For Stephenson’s free-agency stock, whether he re-signs with Indiana or not, it’s a great thing.