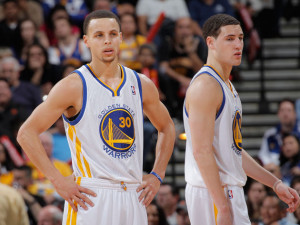 Jordan Crawford may not be enough for the Warriors.

Just a day after completing a three-team trade with the Celtics and Heat that landed the Dubs MarShon Brooks and Crawford, we catch word they might not be done. The thinking there was Crawford, who is averaging a career-high 5.7 assists per game, would hopefully solve Golden State’s backup point guard problem. And its second unit’s scoring problem. And its bench in general.

The Warriors bench checks in at dead last in points per game. Dead. Last. Contenders tend to have shallow benches because, you know, much of their cash is spent on starters, but that’s pretty bad. Okay, fine, it’s horrendous.

Crawford emerged as both a playmaker and semi-consistent scorer in Boston. He remains a habitual chucker, but rookie head coach Brad Stevens instilled a sense of selflessness in him that may not go away. If he can score while providing additional playmaking in Golden State, then the Warriors will be fine. If he doesn’t, well, then the Warriors gave up a player they weren’t using for a player who won’t take them to the next level. No big deal.

But this next tidbit could be a big deal.

Per the The San Francisco Chronicle‘s Rusty Simmons, the Warriors might not be done making moves.

“Nobody is sitting back and saying, ‘Well, we’re done now. We did our jobs. Let’s see what happens,’” general manager Bob Meyers said.

The Warriors still need a backup point guard—especially if this Crawford experiment goes South. In fact, if we’re being honest, they now have fewer point guards after this trade than they did before, having lost Toney Douglas, their only other point guard on the roster aside from Stephen Curry.

As the Feb. 20 trade deadline nears, more rumors will start to surface. Tankers and fringe-playoff teams falling out of contention will become sellers, and it’s then that teams like the Warriors, who are biding their time, can strike.

Golden State’s situation is especially intriguing, because not only does it have so many assets (Harrison Barnes) it could decide to move, but it’s still armed with a vast array of trade exceptions following a busy offseason that saw them dump Andris Biedrins and Richard Jefferson.

Using those exceptions, since they’re under the luxury-tax line (barely) gives them some options and flexibility, allowing them to take back a potential point guard without giving up anything substantial in return. Options increase, obviously, if they’re able to dump contracts in the process.

Does this mean they’re definitely going to make a deal? No. But they could. They’ve been largely inconsistent—though a lot better since Andre Iguodala returned—especially on the offensive end.

For now, let’s just sit back, grab a brew and enjoy the circus act that is Crawford-led second unit.