Derrick Rose Still a Candidate For Team USA Next Summer 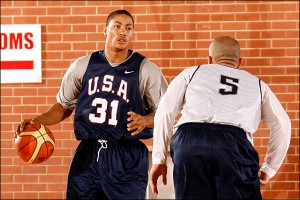 Next summer, the basketball world will shift their focus to the FIBA Championships. Had it not been for his knee injury, DerricknRose would’ve been a part of last summer’s Olympic roster. So will he suit up next summer? It sounds like the job is his if he wants it.

How he performs this year for the Bulls will obviously determine alot. If he plays cautions and lacking confidence, I doubt he’ll player for any team other than the one who writes his checks.

Rose played for Team USA when it won gold at the 2010 FIBA World Championships in Turkey. He has consistently expressed his desire to play in an Olympics. What’s his standing moving forward? ‘He could factor in very well,’ USA Basketball Chairman Jerry Colangelo said. ‘It’s really up to him. We’re waiting for him to come back physically and emotionally and see how he does this year. But we very much consider him a candidate.’