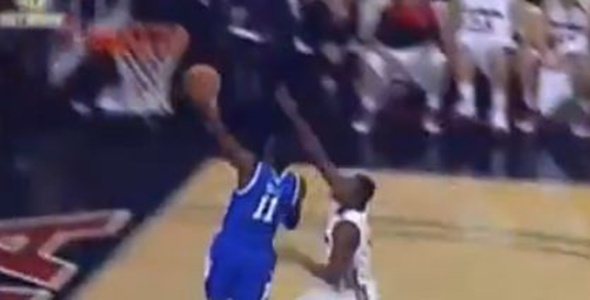 Kentucky’s all world freshman point guard, John Wall, has been treating us to some spectacular individual plays virtually on a nightly basis, all season. Whether it was hitting the game winner in his first collegiate game, his behind the back lay-ups, or that whole John Wall Dance craze phenomenon. There’s no other way to put it, Wall is just plain awesome. Watch all of the highlights that you can since he will most likely be the #1 pick in this season’s NBA Draft.

Recently, Wall made another one of those plays that make you say, “Did he just do that?” In a game against SEC rival Georgia Bulldogs, the Kentucky freshman phenom poked his hand into the passing lane, got the steal, and took off like a blue streak headed towards his own basket. Even though he got 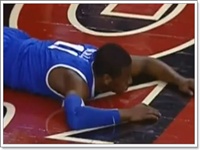 hacked at the rim, Wall jammed the rock with authority, and fell face first to the hardwood, dislodging his mouthpiece. He fell so hard, that at game speed it appeared that may have lost a tooth, since his mouth-guard is white and blue.

What makes the whole sequence so amazing is that the ball never comes out of Wall’s left hand. While left handed drives and breakaway dunks are hardly a rarity in the college ranks, going nearly coast-to-coast and finishing southpaw, definitely ranks a 9.5 out of 10 on the difficulty meter. Former NBA star Charles Barkley was on hand and even marveled at Wall’s deftness with both hands.

As a side note, check out the rather large Big Blue fan at the 0:23 mark of the video who is obviously a BIG John Wall fan: