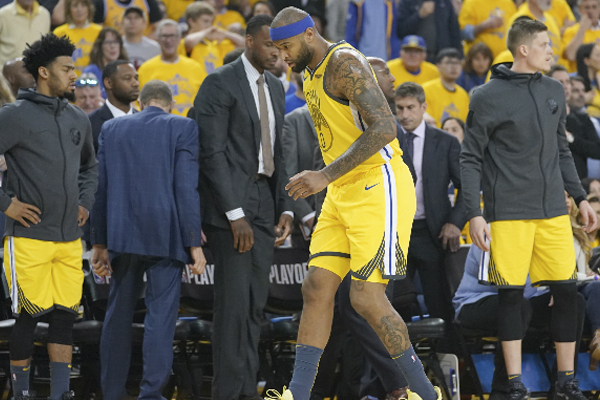 After Monday’s 135-131 loss to the Clippers, Warriors head coach Steve Kerr confirmed that DeMarcus Cousins suffered “a pretty significant quad injury” and would be out “a while.”

ESPN reported the Warriors fear Cousins sustained a season-ending torn left quad. The best-case scenario could be a strained quad but the full extent of the injury won’t be confirmed until he undergoes an MRI on Tuesday.

“There’s a pretty significant quad injury,” Warriors coach Steve Kerr said after the game. “We’ll get an MRI [on Tuesday], but he’s going to be out for — I’ll just say a while because I think it’s unclear right now how long he’ll be out. It’s significant.”

Cousins was chasing a loose ball with 8:30 remaining in the first quarter when his left leg buckled, sending him to the hardwood, where he looked to be in pain. He was immediately removed from the game and taken to the locker room.

Though the Warriors extended their lead to 31 points, the Clippers fought back to steal the game.

Cousins missed almost a full year of play with a torn left Achilles suffered last season in New Orleans. He signed a one-year deal with the Warriors and made his long-awaited playoff debut in Golden State’s Game 1 victory Saturday, recording nine points, nine rebounds, and four assists in 21 minutes.

He will become a free agent this summer.