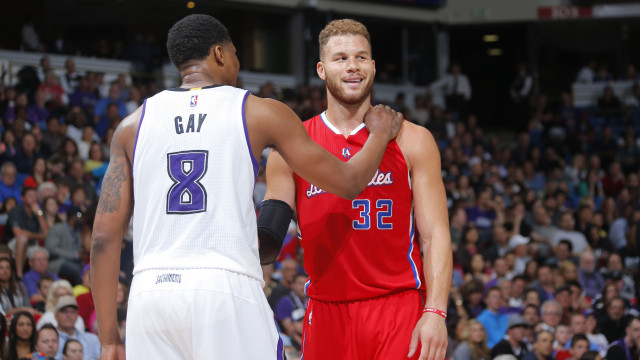 The Oklahoma City Thunder’s proximity to the luxury tax won’t stop them from trying to make moves in free agency.

First up, according to The Vertical’s Adrian Wojnarowski, is Rudy Gay:

Gay and the Thunder have been linked before, prior to his Achilles injury. His development as a spot-up shooter makes him an interesting fit next to Russell Westbrook, and he gives Oklahoma City another shot creator should Billy Donovan be hell-bent on not staggering Victor Oladipo’s minutes with those of Westbrook.

Cost, however, figures to be an issue. The Thunder, at most, will have the full mid-level exception (valued at roughly $8.4 million), to work with. It’s unclear if that, or the taxpayer’s mid-level ($5.2 million), would be enough to put them in the running.

The Thunder have planned on chasing Blake Griffin for months now. They have to feel that their chances got at least a little better now.

The Thunder don't have the cap space, but they have a number of sign-and-trade options available to pursue Griffin.

This pursuit is going to be tough. The Thunder need $29.7 million to pay Griffin his max salary next season. As of now, if they carry cap holds for Andre Roberson and Taj Gibson, they’re close to $35 million over the $99 million salary cap.

A sign-and-trade for Griffin is possible, but very unlikely. The Thunder cannot be $4 million over the luxury-tax threshold after that transaction ($119 million + $4 million = $123 million), so they would have to shed about $10 million in salary before or as part of that deal. Renouncing Gibson’s free-agent hold helps, and they can use Oladipo to anchor an offer. But you still have to worry about paying Roberson while not crossing that $123 million line, something that’ll be impossibly hard to do while you have $70-plus million invested in Griffin, Steven Adams and Enes Kanter.

Effectively, then, Griffin will cost the Thunder at least Oladipo and a Kanter salary dump, plus perhaps some other picks and cap fodder. So it’s more than safe to say they’re better off focusing on Gay.