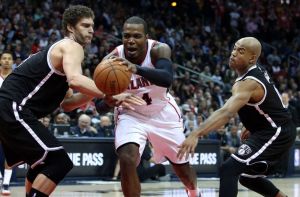 One week from now, the Brooklyn Nets might be able to thank a quirk in the late-season schedule for boosting them into one of the Eastern Conference’s final playoff spots.

The Nets, on a basketball night overshadowed by Duke’s thrilling victory over Wisconsin in the NCAA tournament championship, toppled the short-handed Portland Trail Blazers 106-96 at the Barclays Center.

Damian Lillard poured in 36 points, but it wasn’t enough for the Blazers, who were without starting power forward LaMarcus Aldridge, starting small forward Nicolas Batum and key reserve Chris Kaman. Each player has been battling an injury, so coach Terry Stotts gave them the night off.

Batum, Kaman, and Aldridge are being held together by scotch tape and chewing gum. A night off made sense.

All of that, remember, is in addition to starting shooting guard Wesley Matthews being sidelined due to an Achilles injury.

But the mass off-day was a calculated decision. Portland elected to leave the trio (and Matthews) at home, since the team will host the Minnesota Timberwolves back at the Moda Center on Wednesday night. After hosting New Orleans on April 4, a pair of cross-country flights for three injury-riddled players didn’t make much sense.

What’s more, barring some absurdity in the final week of the regular season, the Blazers are locked into the West’s No. 4 seed as Northwest Division champions. At this point, rest is paramount for Portland. One more victory doesn’t change the fact the team will have home-court advantage in its first-round series.

But Brooklyn doesn’t care how it earned the win. The Nets needed the victory in the worst way.

Lionel Hollins’ crew entered the night a mere half-game ahead of the eighth-seeded Boston Celtics, 1.5 in front of the Indiana Pacers and Miami Heat, two up on the Charlotte Bobcats.

Simply looking at Brooklyn’s schedule prior to the outing, many fans would have chalked up a loss for the team against a complete Blazers roster. However, the win lowered the Nets’ magic number to just four.

Brooklyn catches a break with the schedule win, though D-Will and Lopez are playing at peak levels these days.

And at a time where the franchise could use any assistance available, it was a welcomed sign for Brooklyn. The East-leading Atlanta Hawks are up next, followed by playoff-bound squads in the Washington Wizards, Milwaukee Bucks and Chicago Bulls.

In perhaps the only saving grace of the final week, the Nets finish their 2014-15 campaign with the Orlando Magic.

Nevertheless, after an unexpected, crucial win over Portland, if Brooklyn can scrape out two or three victories over its final five contests, that should be enough for Brook Lopez, Deron Williams and Co. to remain in the top eight of the East.

Though the Nets’ playoff life is far from a guarantee, their playoff heartbeat was propelled by a Blazers team that’s safely settled into a particular spot, thanks to the schedule giving Portland a one-game cross-country road trip.

But Brooklyn took advantage of a gift. That’s the important part. Now, it’s a matter of grasping the playoff berth that’s almost within reach.