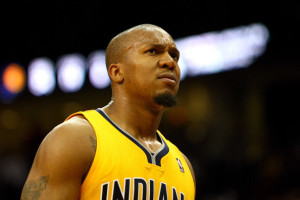 Quietly, David West is 34 years old. While that’s young enough to play a few more years, West have been thinking about retirement for quite some time now. In fact, a 33 year old West was ready to walk away if the Pacers won the 2012-13 championship.

During media day, West sounded very down and out. After hearing some of his quotes, it sounds like his heart isn’t into it. How will that translate this season?

Still, as West high-knees it up and down the court, he can see the light at the end of the tunnel shining brighter and brighter. […] “Oh, yeah. Absolutely. You know, that’s a part of it. You’ve got to be prepared for that. I was already close to retiring a couple years ago,” West said after practice Tuesday. “I was telling guys then, if we had won the championship (in 2013), I probably would have walked away.”

“At that moment (George’s devastating leg injury), the light went out,” West said. “Even with Lance (Stephenson) gone … before he gets hurt, I’m like, Paul’s really going to have a chance to grow. So the light was still there. We’ll just ride with Paul and see what happens. When he got hurt, I was sorta like ‘damn!’” […] “What we were looking for, obviously what our goals were as a group the last couple years, the light just went out on that,” West continued. “I wouldn’t necessarily say I was (declaring) I’m not going to play, but I definitely think about it. Like I said, I don’t have a lot of time left in this league. I’m just one of those guys that just never intended to play a long time.”

“I’ll focus on the work that we have, the task that we have here and the thing, we have to do here to get ourselves rolling and get ourselves in a good position. See what types of groups we can put on the floor, particularly early, and see what sort of team we are. We’ve got to develop an identity,” West said. “Again, it’s just a part of it. I don’t think anybody’s backing away from it. We’ve got to face what our reality is.”