James Harden Would Consider Shaving His Beard for $10 Million

admin April 18, 2014 Offbeat No Comments on James Harden Would Consider Shaving His Beard for $10 Million 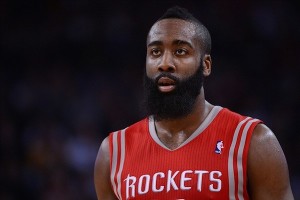 During an interview with ESPN’s Hannah Storm, the Houston Rockets superstar discussed a number of important topics, including his departure from the Oklahoma City Thunder. He confirmed that money forced his hand in leaving and that if it wasn’t an object, he would still be playing alongside Kevin Durant and Russell Westbrook today.

But that’s not important. Or rather, not as important as the discussion that took place pertaining to Harden’s facial forest.

“If I gave you a million dollars would you shave your beard?” Storm asked.

“No, seriously? You wouldn’t shave your beard for a million?”

“Then we can talk,” Harden said chuckling. “Maybe.”

I mean, wow. Harden’s beard has always been one of those mysterious subjects. You knew he wouldn’t shave it off just because. But $10 million? That’s how much it would take for him to consider removing the jungle from his face? And he might not even do it?

Imagine someone offering you that kind of cash. Hell, forget $10 million. Forget $1 million. I’d shave my beard for a few hundred bucks. I can’t grow a proper beard nor do people actually care whether or not I shave said beard, but you get the point.

Harden, meanwhile, might not even do it for $10 million. Ten freaking million dollars. Do you know how many fake replica Harden beards he could buy with that and subsequently wear until his real one comes in? More than a few.

If push came to shove, it’s safe to say $10 million would do it. Maybe “safe” isn’t the right word, but it’s close. The bearded wonder is earning $13.7 million this season in the first year of his five-year, $80 million extension. Who is he to turn down nearly 73 percent of his 2013-14 salary and 12.5 percent of his entire contract just for putting razor to face? No way he turns down $10 million, right?

As much as I’d like to think so, this is Harden’s beard we’re talking about. Even if he did give it a trim for $10 million, it would probably be something he grappled over. He doesn’t need the money. It’s proportion to his salary could also become negligent once you factor in whatever he’s making in endorsements.

At that point, you have to wonder what it would actually take for him to shave it off without even thinking. Would $15 million be enough? Twenty? Twenty-five?

Let’s stop there, because I’m now depressed my beard isn’t as lush nor worth as much.

Something to consider, though: What would it take for Anthony Davis of the New Orleans Pelicans to wax his unibrow? Like, is he at the point where it would take millions too? He’s still on his rookie contract, so maybe he could be convinced to give it the ol’ heave-ho at a discount.

Then again, he did trademark his unibrow, so maybe not.

The nerve of him. And Harden. Freaking financially savvy business men who hold all the leverage ever in any hair-removal negotiations.

Here’s some advice: As much as most of you know you want to see a clean-shaven Harden and dual-eyebrowed Davis, if you ever have $10 million lying around, please don’t waste it on trying to de-hair NBA superstars. Invest it in something awesome instead. Like the development of chicken-, mashed-potatoes and gravy-flavored chewing gum for instance.