Have We Underrated Michael Carter-Williams? Near Quadruple Double In Debut

admin November 1, 2013 Allen Moll 1 Comment on Have We Underrated Michael Carter-Williams? Near Quadruple Double In Debut 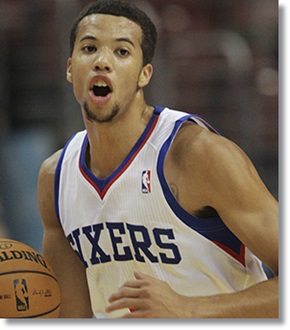 His first official bucket came on a steal and coast-to-coast thunderous slam against the World Champion Miami Heat.

Sounds like an awesome introductory first few minutes in the NBA….but it was only the beginning, as the 6’6 lanky point guard out of Syracuse set an NBA record for steals with 9, including 2 picks of 4 time MVP Lebron James, to go with 22 points, 12 assists, 7 rebounds, and an even more impressive 1 lone turnover as the heavy underdog Sixers bested the Heat in Philly’s home opener.

Much of the future excitement in Philadelphia, besides all of the tanking talk to get Andrew Wiggins, was about former Kentucky center Nerlens Noel, who fell to #6 in the draft and was traded to Philly for All Star Jrue Holiday.  Noel was projected by many to be the top pick, but concerns over a torn ACL injury during his lone season at UK, had him waiting in the green room for nearly an hour on draft night until the Pelicans came calling, before promptly trading him to the Sixers.

We shouldn’t be all that surprised by Carter-Williams impressive debut since he led the nation in assists for most of his sophomore season last year at Syracuse and was a defensive demon, as the first line of defense in Jim Boeheim’s vaunted 2-3 zone defense.

Because the Sixers aren’t expected to be very good at all this season, they may have overlooked Carter-Williams in early Rookie of the Year rankings, instead focusing on Trey Burke of Utah as the top rated point guard coming out of college.

But although it’s early, it looks like underrating Carter-Williams could be a really big mistake….