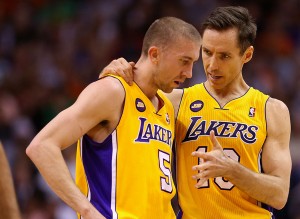 The NBA offseason is annoying.

Others may use other words to describe it, such as grueling, prolonged and evil. But I just find it annoying. Really, really, ridiculously annoying.

Before I delve too deep into my pet peeve, there is some good news for Los Angeles Lakers fans: Steve Blake told Lakers.com’s Mike Trudell that Steve Nash “looks great.” Finally.

Injuries limited Nash to just 50 games last year. The 32 that he missed were a career high. Blake’s encouraging assessment, then, is a good thing. Kind of.

Not-so-precious time is spent dissecting how players look or how they’re doing during the offseason. Short of a major injury recovery, who cares? It’s news that Derrick Rose is ready for the opener; him telling us he’s more explosive now means nothing. It’s news when Kobe Bryant pencil dives into a swimming pool; it would be different if he told us he was ready to drop 35 points tomorrow.

That’s the thing about offseasons, there’s nothing truly substantial to talk about most of the time. Which is why we buy into in-game progress reports when they actually don’t mean anything. They can’t. The season hasn’t started, so we don’t know how these players are going to look in games.

I myself would be more shocked if it was reported that Player X was out of shape heading into training camp. That’s news. It’s just assumed that professional ballers are working their asses off over the offseason because that’s their job—to stay in shape no matter what. When we hear that so and so “looks great” or that they’re poised for a career year, well, we have no real way of knowing if that’s true. It’s just a topic to chew on and pass the time with.

To be sure, I have nothing against that. If I’m a Lakers fan, I’m feeling pretty good that Nash is looking pretty good. What with Kobe still rehabbing a torn Achilles, Dwight Howard now a member of the Houston Rockets and signings like Wesley Johnson and Xavier Henry being portrayed as solid moves, that fanbase needs a little good news. Not “Kobe may or may not be fine” good news, “but Steve Nash is ready to be Steve Nash” good news.

Approaching 40, Nash’s days of single-handedly carrying teams to (near-) playoff berths are likely over. That’s what happens as you age. No knock on his ability is intended. Just the opposite, in fact. Los Angeles still needs him. Badly.

Prognosis’ like Blake’s, however, aren’t. While it’s encouraging that Nash looks great, he should look great—right now. All players who aren’t fitted in some sort of a cast should look great now. Later is what matters, though. When the games start, that’s when we’ll know who actually looks great and who doesn’t. Should Blake be able to say the same thing six weeks from now, feel free to have confetti at the ready.