admin February 19, 2013 Rumors No Comments on Chicago Bulls Derrick Rose is Doing 5 on 5 Drills in Practice 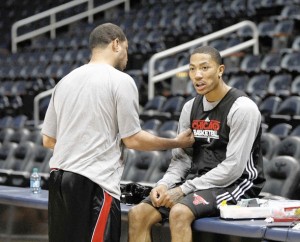 It seems like for every time you hear a rumor that the Bulls franchise player Derrick Rose is taking a step forward and hitting some practice milestone, you hear a conflicting statement out of the Bulls camp that he’s progressing slower than expected and he might not make it back next season. Here is another flicker of hope from the Chicago Tribune, saying they have heard from team officials and players that say Derrick Rose is now participating in 5 on 5 action in practice. No dunking yet though…

“He did what everyone else did, just a normal practice,” coach Tom Thibodeau said of Rose, who in interviews last week admitted he was unsure whether he would be ready to play this season.

Thibodeau said Rose still is progressing as scheduled and the team just need to be “patient” with him. Joakim Noah noted that Rose still isn’t dunking during drills.

Last week, Bulls vice president of basketball John Paxson told WMVP-AM 1000 that the return from the All-Star break would allow the team to do full-court, five-on-five drills and that Rose would join in. (via)

The Bulls have been holding fairly steady considering they are missing former league MVP and top tier talent Derrick Rose. If there is any chance Derrick Rose is ready to play come playoff time, it could get scary in the East, with Miami, New York, and Indiana all looking legit.