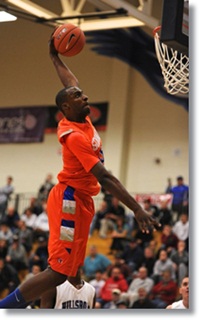 If you didn’t already know it, #1 rated HS player in the 2012 Class, Shabazz Muhammed is really, really good. The nation’s consensus top rated prospect took full advantage on live television to showcase his immense offensive skills to ESPN’s worldwide audience and those in attendance at Springfield’s 2012 Spalding Hoophall Classic, earning MVP of the event.

Despite a plethora of top notch talent on display like 2013‘s top player Jabari Parker, UCLA commit Kyle Anderson, and UNLV signee Kaitin Reinhardt, Muhammed was undoubtedly the star of the event. He dropped 37 points, including 7 rim rattling dunks, in helping his Bishop Gorman squad finish off #5 nationally ranked Dematha HS during action on MLK Day.

Shabazz essentially started and ended the 73-65 win with highlight reel dunks, first with a breakaway one handed flush, then an unbelievable windmill jam to punctuate the victory in the game’s final ticks. What makes his exploits even more outstanding is that he had one of his best games of the season, if you don’t count that 50 point game as a junior, in front of a bevy of potential suitors like John Calipari of Kentucky and Coach K from Duke.

Muhammed is one of the top still uncommitted recruits in the senior class along with Findlay Prep’s Anthony Bennett and Miller Park’s dominating big man Tony Parker, all of whom had squads that were on display in this year’s Hoophall Classic.

Is 6’11 HS Freshman Karl Towns Jr The Next Kevin Durant?