Orlando Magic: Revenge of the Fallen 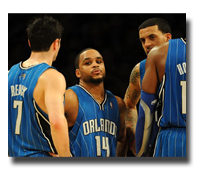 You know we love to scour YouTube for the best and the brightest of NBA mix artists. Well today we didn’t have to as they came to us. In fact they came to us in the form of one of our readers, Meir Erginbas. Mr. Erginbas has some serious video editing skills and obviously is appreciating the run the Orlando Magic are on right now. Y’all realize the Magic haven’t lost a game since before Easter? And they haven’t lost back to back games since, God knows when! I hate to say it but if the Cavaliers are having this much trouble with the Celtics, even if they somehow miraculously beat the C’s at this point their fate may be the same in the Western Conference Finals against the rested Magic.

But the Orlando Magic don’t want the same fate they had last year in losing in the NBA Finals to the LA Lakers. In fact Meir Erginbas figures it’s all about revenge. That’s why I present to you, “Orlando Magic – Revenge of the Fallen”: