admin April 7, 2009 Blogs 9 Comments on Top Ten Signs You Might Not Be A Great NBA General Manager 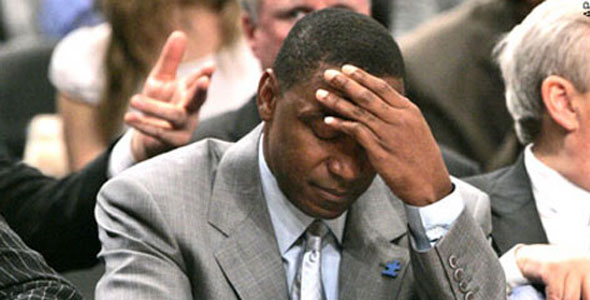 In honor of some of the bonehead moves by NBA General Managers over the years, I thought we should take a look at some signs or symptoms that may be associated with being a terrible NBA GM. Without further ado:

10. You decide to draft a seven footer by the name of Darko Milicic over Carmelo Anthony, Dwyane Wade, and Chris Bosh among others.

9. You believe that having a player’s “Bird Rights” means that you have the ability to borrow that player’s pet Budgie whenever you feel like it.

8. You trade NBA Superstar Vince Carter for ten bucks, a slurpee, and an agreement that he always tries his hardest and plays his best when he comes back to Toronto to play against your club.

7. Even though you know that the NBA is a business you rely on handshakes, winks, and nudges to get a deal done with Carlos Boozer instead of waiting for the time to sign papers and/or research options.

6. Shortly after Carlos Boozer signs elsewhere you tell the whole world you had an under the table deal with him before he was a free agent and that HE reneged, in other words telling the world you broke the NBA rules and would like to add an NBA fine and sanction to your heartache.

5. You assume the ‘Developmental League’ or D-League is some sort of basketball league for the mentally or physically challenged.

4. You sign a 38 year old, washed up, ex-NBA Star such as Hakeem Olajuwon to a 3-year $17.4 million contract. And pat yourself on the back for a job well done.

3. On draft night you decide it’s a good idea to use your #1 overall pick to sign the unproven high schooler Kwame Brown on a ‘hunch’, instead of Tyson Chandler, Pau Gasol, Shane Battier, Zach Randolph, Sam Dalembert, Richard Jefferson, or Gilbert Arenas.

2. Faced with a tough decision on NBA draft night, you ‘draft for size’ and end up with Sam Bowie, while the Chicago Bulls end up with a relatively unknown player by the name of Michael Jordan, and the odd NBA Championship. But those aren’t all that important are they?