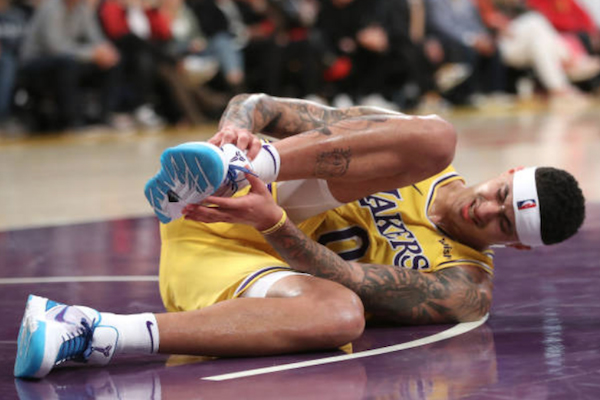 Lakers Kyle Kuzma left Monday’s game against to the Clippers with a sprained right ankle.

Kuzma rolled his ankle with 6:09 remaining in the fourth quarter. He eventually made his way back to the bench and then to the locker room with the Lakers’ athletic trainer.

Kyle Kuzma goes down with what looks like a right ankle injury pic.twitter.com/uP187HkpcU

Head coach Luke Walton said after the game that Kuzma was “limping pretty badly,” and that he’d be surprised if he played on Wednesday against the Denver Nuggets.

X-Rays were negative on Kyle Kuzma’s sprained right ankle. As Luke Walton said, though, it’d be a surprise to see him be able to play on Wednesday.

The team later announced that X-rays on the injury came back negative.

Kuzma finished with 13 points and six rebounds as the Lakers fell to 30-34 on the season with their third-straight defeat. Kuzma has averaged 18.9 points on 46.8 percent shooting and 5.6 rebounds for the Lakers.