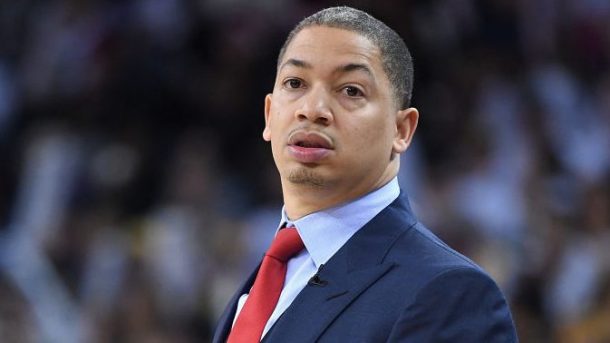 Tyronn Lue left during the Cavaliers victory over the Bulls in Chicago on Saturday night and has missed time here and there over the last few weeks due to illness.

Apparently that health issue is more serious than was previously thought as Lue is taking a medical leave of absence according to Adrian Wojnarowski of ESPN:

“After many conversations with our doctors and Koby and much thought given to what is best for the team and my health, I need to step back from coaching for the time being and focus on trying to establish a stronger and healthier foundation from which to coach for the rest of the season.

I have had chest pains and other troubling symptoms, compounded by a loss of sleep, throughout the year. Despite a battery of tests, there have been no conclusions as to what the exact issue is.

While I have tried to work through it, the last thing I want is for it to affect the team. I am going to use this time to focus on a prescribed routine and medication, which has previously been difficult to start in the midst of a season. My goal is to come out of it a stronger and healthier version of myself so I can continue to lead this team to the Championship we are all working towards.

I greatly appreciate Dan Gilbert, Koby Altman, our medical team and the organization’s support throughout.”

“We know how difficult these circumstances are for Coach Lue and we support him totally in this focused approach to addressing his health issues.”

This is obviously a scary situation for Lue as if I were to try and read between the lines and make a guess, he may have been showing the early symptoms of an oncoming heart attack or stoke.

Coaching an NBA team is a stressful, high-pressure job and that is ratcheted up a lot by coaching a team featuring one of the greatest players of all time in LeBron James. While the timing is not ideal for the Cavaliers and some will question it considering the heated shouting match on the sidelines between James and Lue in Portland last week, this seems like a serious issue with Lue’s health and it is absolutely necessary for him to try and remedy it before something catastrophic happens.

Hopefully Lue is able to recover and get his health back under control, but this is yet another obstacle in what has been a very trying 9 months for the Cleveland Cavaliers organization in what could be their last hurrah with LeBron.