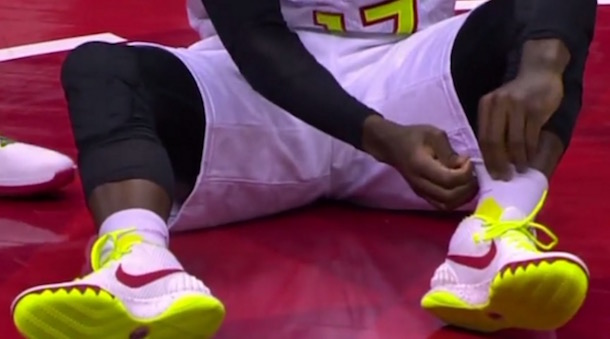 In the fourth quarter of the Hawks 106-97 win over the Blazers in Atlanta Monday night, Dennis Schroeder took a nasty hit slipping and falling head first into Meyers Leonard’s knee, knocking out one of his teeth in the process.

Schroeder understandably sat there in pain for a little while before deciding to check himself out of the game, but from this video posted from the Hawks twitter account from last night’s broadcast Schroeder snatched up his now dislodged tooth and put it in his sock, one could only assume in the hopes that the tooth fairy would visit him later that night and collected his tooth for a fee.

#ICYMI, @DennisMike93 lost a tooth during last night's game and found a clever place to store it: https://t.co/YJdAjPzmSi

My sources tell me Schroeder also believes in Santa Claus and all he had on his wish list this year was to become a starting point guard.