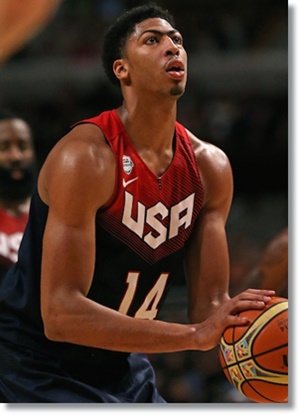 The last time the basketball World was focused on USA Basketball, the US Men’s National Team, led by MVP Kyrie Irving, James Harden, and Anthony Davis, were putting a whooping on Serbia to win the Gold Medal in the 2014 FIBA World Championships in Madrid, Spain.

But the interesting question remains of just which players will make up the 2016 Team USA squad now that long time participants like Kobe Bryant, Lebron James, and Dwyane Wade are well into their 30’s and aruably past their primes?

The answer to that question should become a tad clearer when USA Basketball holds a 3 day mini-camp in Las Vegas beginning August 11th and running through the 13th, in what is to be a legitimate evaluation and cutdown of the now 32 man roster.

This won’t be the final roster as superstar players will more than likely be added before next season but it will be interesting to see some players once again hooping after missing some time due to injury like Carmelo Anthony, Paul George, and Kevin Durant.

It was reported that players like Demar DeRozan and Damian Lillard will be in attendance but not participating as others like Kyrie Irving, Kevin Love, Chandler Parsons, as well as Durant and Anthony will be there despite still recovering from injury.

USAB managing director Jerry Colangelo, meanwhile, told ESPN.com that next month’s camp will actually serve as more of a “reunion” for various players who have worked under Colangelo and Team USA coach Mike Krzyzewski in the past two Olympic tournaments and the past two world championship-level events.

Right now the roster stands at more than 40 players, including the 34 announced last September plus 7 new invitees, but must be whittled down to 13 participants prior to the Rio Games in 2016.

Here is a full list of the participants invited to the 2015 Team USA Mini-Camp in Las Vegas: