Report: Duncan Had $25 Million Stolen By His Financial Advisor

admin June 18, 2015 Rumors No Comments on Report: Duncan Had $25 Million Stolen By His Financial Advisor 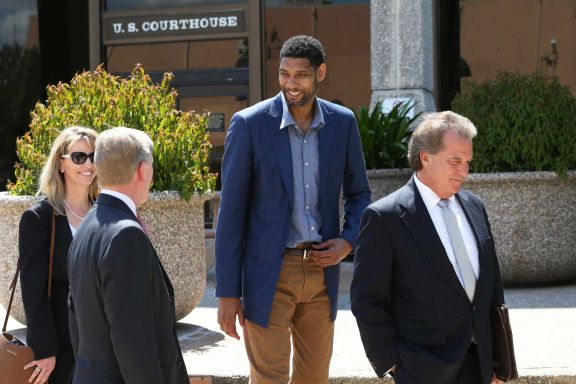 Tim Duncan is one of the ‘good guys’ of the NBA. Mr.Fundamental is not just technical about his play on the court, he’s also quite adept at business and managing his money. He has many financial advisors helping to run his business, all people he thought he could trust.

But in 2013 when Duncan was going through his divorce and he and some of his staff started going through his finances it was discovered that one of his former financial advisors, Charles Banks, was bilking Duncan out of millions of dollars over many years without Duncan’s knowledge.

Bloomberg this week estimated the amount to be upwards of $25 million in losses to Charles Banks. Duncan had this to say to Bloomberg:

“Luckily I had a long career and made good money,” Duncan said in the report, which was posted on Wednesday. “This is a big chunk, but it’s not going to change my life in any way. It’s not going to make any decisions for me.”

The ‘decisions’ Duncan is referring to is whether or not to continue playing a 19th NBA season or more. Duncan has had a long and prosperous career, but it is still amazing to your average Joe, that $25 million can go missing from your assets without you realizing it. Here are Duncan’s thoughts on his part in not realizing the money was gone….

“The bottom line is this: You can’t be angry at yourself. I keep going back to this word, but I trusted someone. I was wrong about it. I got screwed over for it. I’m not mad at myself for that. That’s a lesson learned. I’ll never put myself in that situation again.

“I’m a loyal guy. I’m a man of my word, and I assumed other people would be that way. That’s just not the case in life.”

Duncan is right. I don’t care who you are, once you amass a certain level of wealth and business there is no way you can keep your eye on everything all the time. Eventually you are going to have to surround yourself with people you trust. You just have to hope those people have a high enough level of character and integrity that they don’t take advantage of you.

Duncan made an approximate $225 million in earnings over his career to date. Not including profits from business and endorsements, I’m guessing he will be just fine. But that said, if Banks is proven guilty in court for taking the money, he deserves what is coming to him.