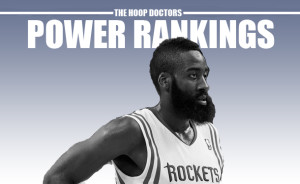 Never before, in the year-plus since we’ve been doing these power rankings, has there been less movement within a week.

Twelve teams are right where they were last week, which is pretty freaking incredible. That’s almost half the Association, and that never happens. And, somewhat surprisingly, it’s the league’s best teams that have held strong. That’s saying something considering how top-heavy the Western Conference remains; its playoff picture is the bane of stability’s existence. There are so many good teams, the hottest one changes almost daily. Typically, anyway. But, again, not this time.

In other news, the Warriors are still good, even after falling to the Grizzlies, who are also good; the Sixers are back where they belong (the bottom); the Thunder are climbing ladders; the Rockets are inexplicably incredible; and the Hawks look nothing like the Hawks of the last decade, which is a good thing.