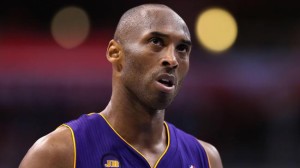 With exactly 1:10 remaining in the game, Bryant scored his 32,000th point on a turnaround and-one jumper that eventually resulted to a win over the Hawks at their very home floor. Immediately, the Lakers gave recognition to this accomplishment via Twitter.

In just a few more games, Bryant will likely surpass Michael Jordan on the all-time scoring list as he only needs 292 more points. Although it took him a lot more games/seasons played, and a hell of a lot more shots taken than it did Jordan, it will likely still spark the never-ending debate on who the better player was (Jordan or Kobe). Although most fans fall on the obvious side of Jordan being a much better defender making him the better all around player, Lakers fans will certainly do their best to make it a conversation. Not to take anything away from Bryant though. It takes a hell of a player to reach 32,000 points in an NBA career.