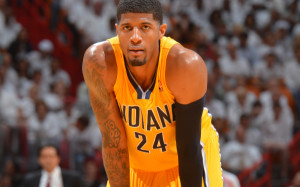 It doesn’t get much worse than the injury Paul George suffered over the weekend. Injuries are a part of the game, but it’s unfortunate it had to happen during a scrimmage. Now, everyone is panicking over whether or not stars will want to play in international competition in the future. Let’s not get carried away: Paul didn’t get hurt because he was playing for Team USA. He got hurt because his foot got jammed under the hoop stanchion. Period.

But the good news is that he’s reportedly expected to make a full recovery. You hate for this to happen to anyone, but on the bright side, he’s only 24 and not even in his physical prime yet.

George Sr. told The Indianapolis Star that his son suffered an “even break” in his right leg that will allow him to return at 100 percent. Though George is experiencing some pain, George Sr. displayed a smiling expression fitting the name of the medical center when he repeated the positive prognosis his son has received after undergoing successful surgery to repair an open tibia-fibula fracture. Doctors believe that the two-time All-Star will eventually return to his career with the same athletic capabilities as before

“Paul’s doing well now. He’s doing good. He’s just resting right now,” George Sr. said. “If it had to break, it broke the right way. It broke evenly, so they’re saying he should be back 100 percent. But of course, he’s got to go through his long process of healing and getting back in the gym but they’re saying that shouldn’t stop him from doing what he was doing once he’s healthy again.”