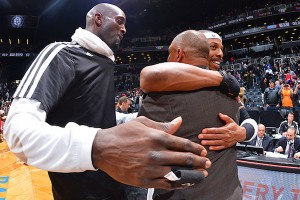 Believe me, that’s an important distinction these days. Allen was the rat bastard traitor who left the Boston Celtics high and dry in 2012, spurning them for the Miami Heat and the opportunity to win a title. Rivers, who orchestrated his departure from Boston, is almost perfect. Or so says Kevin Garnett.

Following the Brooklyn Nets’ 102-93 win over the Los Angeles Clippers—the game actually wasn’t as close as the score suggests—Garnett waxed poetic about his former coach, according to the New York Post‘s Tim Bontemps:

He taught us a lot about not just basketball and the philosophies of it, but about being a young man, a young black man, understanding your responsibilities, because we were starting our families. [He’s] just overall a great model. No one’s perfect, all humans have their flaws or whatever; but shoot, he’s damn near close to it. I’m just grateful he came into my life and that I had that experience to him.

Warm and fuzzy feelings are understandable. Rivers coached Garnett for over a half-decade. He coached Paul Pierce for nearly a decade. Breaking up was never going to feel sweet—it was going to be painful. And when the three met for the first time, as opponents, it was always going to be an emotional occasion.

Think of it like seeing your former girlfriend on Garnett’s part. The one who dumped you and then got hotter. Rivers left Garnett, Pierce and the Celtics, only to arrive in Los Angeles, to coach the aesthetically appealing Clippers. Meanwhile, Garnett isn’t playing close to his best basketball and, despite their victory, the Nets rank near the bottom of the Eastern Conference.

But I do wonder why Doc is “damn near close” to perfect while Allen is essential scum. Doc and Garnett embraced before Thursday night’s game, as shown above. When Allen played the Celtics for the first time as a member of the Heatles, Garnett ignored him. Gave him the cold shoulder. Why is Doc different?

You know why. And I know why. Because Garnett left, too. Boston’s core, or what remained of it, was dismantled together. Pierce, Garnett and Doc left together. Allen left prematurely, painting the picture of him as a villain. Had Doc left before 2012-13, I wonder if KG would still be singing his praises. He’s not publicly impolite to Allen, but that’s because he doesn’t talk about him anymore. At all.

Ironically, though, Doc and Allen left under similar circumstances, on their own accord. Doc wanted to coach elsewhere when he received whiff that the Celtics were rebuilding, and Allen left when he sensed the end of Boston’s contending days. KG and Pierce could even be placed in that same category. They were traded, but you better believe they had veto power. Garnett himself actually did. He waived a no-trade clause to land with Brooklyn.

Over and done with, though. That’s what this is. No use harping on it.

As for KG’s perfection comments, most of us won’t call Rivers perfect. He’s one of the best head coaches in the NBA and has started coaching defense into the once offensively oriented Clippers. But he’s not perfect.

Or even damn near close to it.