JaVale McGee Out Indefinitely With Stress Fracture in Leg

Anou Enright November 11, 2013 Rumors No Comments on JaVale McGee Out Indefinitely With Stress Fracture in Leg 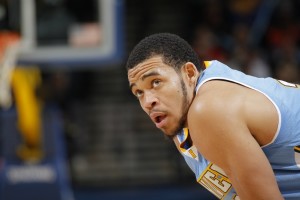 There have been some significant injuries to some key players already this season. Not an overwhelming number, but enough to throw a wrinkle in the plans of some teams.

The Denver Nuggets now realize what this means. They will be without the services of JaVale McGee for the forseable future after the big man was diagnosed with a stress fracture in his left leg. No timetime for his return as of yet.

The  Nuggets took a big hit at center Sunday with the announcement that  starter JaVale McGee will be out indefinitely because of a stress fracture in  his left tibia.

McGee played in Denver’s first five  games.  Friday night’s game at  Phoenix,  however, was the tipping point. When  Nuggets coach Brian Shaw removed him  with  9:34 left in the third quarter, McGee said he was in pain.  He didn’t return to  the game.

“I have no idea on a timetable,” Shaw said of McGee’s return to the lineup.  “It’s unfortunate, but injuries are part of the game. Hopefully we can hold the  fort down until he gets back.”