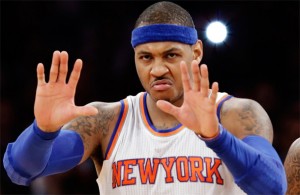 Carmelo Anthony is overrated. He’s also a ball hog. Or at least, that’s the prevailing narrative coming from The Boston Globe.

On Monday, more than 24 hours after the New York Knicks beat the Boston Celtics 85-78 in Game 1 in the first round of the NBA playoffs, The Boston Globe‘s Dan Shaughnessy had a few choice words for ‘Melo:

This is Carmelo Anthony. He doesn’t seem to be a bad guy. He is not the devil. He’s probably going to shoot the Knicks past the Celtics in the first round of these NBA playoffs.

But he’s not going to be an NBA champion. He’s not one of the all-time greats. He appears to be incapable of doing anything to help his team unless he has the ball in his hands.

Not Melo. He plays like an only child. He cannot share the ball. He knows he’s better than all of his teammates and he plays like a man intent on doing it all by himself. He either has the basketball, or he’s demanding the basketball. The Knicks’ offense is Melo pounding, and four guys standing around watching.

The true greats win championships. The overrated ball hogs do not.

I’m not even sure those snippets of the article do its scathing natural justice. It was downright cold. It also made few viable points.

When Anthony wants to, he can score his points in the flow of the offense, keep the ball moving and be unselfish. We’ve seen him do it before, for long stretches at a time. He also has this tendency to go one-one-five, though, like he’s the only player representing his team on the court. His isolation-heavy offensive style often kills ball movement and sends New York’s offense into a fit of stagnancy.

But overrated? A ball hog?

‘Melo’s usage rate was the highest of his career this past regular season (35.6 percent) and he attempted 21.6 shots per game, his most ever, but is this really a fair assessment of the player he is?

Absolutely not. He’s by far one of the most lethal scorers of this generation. And 9 out of 10 coaches in the league would love to have ‘Melo on their squad in crunch time when they desperately need a bucket.

Hailing from New York, I understand that Anthony can be a frustrating talent. And I won’t defend him until my dying breath. You just can’t. He has flaws. All players to do.

What really gets me though is this misconception that he’s some self-centered jackass. I don’t understand it. Perhaps it’s the way he left the Denver Nuggets or just the fact that he’s made it out of the first round of the playoffs just once in nine tries, but people don’t understand him.

Anthony wasn’t brought to New York to pass. He was brought to score. To shoot. To score like only he can. He and Kevin Durant are the two most creative scorers in the game, and I’d hazard that off-the-dribble, away from the rim, there is no one more lethal a scorer than ‘Melo. Not Durant. And not LeBron James.

I’ve also seen how Anthony has improved as a leader this season. He’s had games where he’s allowed himself to be more of a decoy, and where J.R. Smith or someone else to steals the offensive show. That’s an improvement. It shows growth. I’ve also never seen him engaged more defensively. He’s far from great and he (like every other player in the NBA) doesn’t get back quick enough after arguing a supposed missed call, but he’s better.

Seriously, though, overrated? Why is he overrated? He’s only overrated if you attempt to make him something he’s not. He’s not LeBron. He can’t impact the game the same way The Chosen One can. He’s ‘Melo. A scorer who can also rebound. A player who can carry a team to the playoffs on his own.

Bear in mind that ‘Melo has taken every team he’s played on to the playoffs since his rookie season. Not even LeBron can lay claim to that. And while that doesn’t make him better than James, it certainly can’t be held against him.

Yes, ‘Melo may never win a championship. But he could. We just don’t know. To declare that he’s not good enough to contend with the best in the league is ridiculous. He’s flawed, and there are things he can do better, but he’s not overrated.

What is overrated, overplayed and oversold is this belief that he’s not worthwhile, that he hasn’t evolved as a player and person since coming to the Knicks.

That he’s not one of the best players currently in the game. Because he is.