admin February 21, 2013 Rumors No Comments on Kings Trade Thomas Robinson to the Rockets 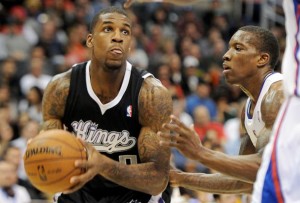 Thomas Robinson was high a top almost all of the NBA Mock Draft boards last year. So its not a surprise that Rockets fans are jumping out of their seats with joy tonight as word spreads that the Rockets have acquired Robinson in a three team deal before the deadline.

The Houston Rockets have reached separate agreements on trades that will send Patrick Patterson, Cole Aldrich and Toney Douglas to Sacramento and Marcus Morris to Phoenix, a person familiar with the situation said Wednesday.

The Rockets will receive Thomas Robinson, the No. 5 pick in last year’s draft, Francisco Garcia and Tyler Honeycutt from the Kings, according to the person, who spoke on condition of anonymity because the deal had not been announced and was still pending league approval. (via)