Anou Enright October 29, 2012 Kevin Burke No Comments on Who Made the Worse Decision: James Harden or the Rockets? 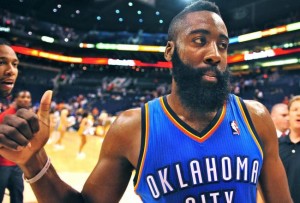 The National Basketball Association can be a very opportunistic place. Occasionally, things may go your way, or “fall in your lap”, and you must simply seize and capitalize on this. From the very moment James Harden was drafted 3rd overall by the Oklahoma City Thunder in the 2009 NBA draft, he has done just that.

James Harden is a solid NBA player, but make no mistake: he has benefited greatly from playing alongside stars Kevin Durant and Russell Westbrook. From an on-the-court standpoint, Harden was in heaven in OKC. He has been dubbed OKC’s best playmaker (rightfully so). But again, that’s primarily because he played alongside Kevin Durant and Russell Westbrook.

James Harden had become a household name within basketball circles and was named to the Olympic team. He’s even the beneficiary of endorsement deals and has his own commercials. All of those were made possible by the fact that he played alongside Kevin Durant and Russell Westbrook. Do you sense the theme developing here?

If James Harden played for a lesser team where he was truly “the man”, not only would the team not be as successful, but he wouldn’t be a household name, wouldn’t have been afforded a roster spot on the Olympic team and probably would not be in any commercials. Again, I think Harden is a solid NBA talent, but let’s temper what isn’t reality.

On Saturday, it was reported the James Harden, who becomes a free agent next summer, turned down a 4-year, $55.5 million contract extension from the Oklahoma City Thunder because he feels he deserves a max contract. The way the NBA operates today, with the likes of Roy Hibbert and Brook Lopez being given the max, I’m not mad at him for wanting more money. Far be it from me to tell someone not to think they’re worth more. However, several hours after he turned down that offer, he, Daequan Cook, Lazar Hayward and Cole Aldrich became the newest members of the Houston Rockets, in exchange for Kevin Martin, Jeremy Lamb and at least two 2013 first round picks. OKC general manager Sam Presti couldn’t risk keeping Harden for this upcoming season and having him bolt next summer without receiving any compensation in return. He did what he had to and should have done. If the Thunder offered Harden the max, they would’ve have had to deal with a myriad of cap and financial ramifications that the team wasn’t willing to endure.

But hold on a second. Harden said “no thanks” to a 4-year, $55.5 million deal because he wanted the max. It turns out that the max is actually 4-years $60 million. A difference of $4.5 million. Look, I don’t care how much money you make, $4.5 million is a lot of money, so I get why Harden may have scratched his head. But is that $4.5 million worth it for Harden? Wouldn’t he easily have recouped that in off-the-court endeavors that would come his way because he’s in the spotlight by playing alongside Kevin Durant and Russell Westbrook, and because Thunder will be good for the foreseeable future?  As a member of the Thunder, he hadn’t even begun to scratch the surface of his celebrity, and lucrative opportunities were sure to come his way. But in Houston, he’s no longer in the limelight, he’s playing for a team that is rebuilding, thus making him less marketable. His beard won’t be as cool as a member of the Rockets, because it won’t be on TV enough for anyone to see, notice or care about it any more.

However, in fairness to Harden, the Rockets can offer him a 5th year on that extension that would add roughly $20 million on top of what he will be offered. But again, his next deal with the Thunder would’ve rivaled that which brings me back to my original point.

The Houston Rockets, on the other hand, seemed determined to shake things up this offseason and they’ve done just that. After grossly overpaying for Jeremy Lin (even though they cut him less than a year ago), they needed to make another splash, which came Saturday night. Jeremy Lin and James Harden are now the starting backcourt for the Rockets. Lin’s deficiencies as a player were becoming magnified towards the end of “Linsanity”, which is why his season-ending injury late last campaign came just in time to preserve his future riches.

Opposite Lin is Harden: a solid player, who, again, benefited from playing alongside Kevin Durant and Russell Westbrook (sorry to be redundant, but I need to hammer home the point). Neither appear to have the prowess to be “the guy” on a team to be taken seriously. They are nice complementary players so I hope Houston is planning on bringing in a sure-fire star player at some point.

The winner in all of this is clearly OKC. They still have Kevin Durant, Russell Westbrook and Serge Ibaka, and have added an underrated Kevin Martin (granted, he and Harden are two different players), a rookie in Jeremy Lamb who has a great deal of promise, two first-round picks, and Perry Jones who they drafted. I don’t think it’s even close.

So, while I can’t fault Harden for chasing dollars, I don’t know that in the long-term he’ll make more in Houston for the aforementioned reasons. And the Rockets, who will give Harden the max, reached on this one big-time. Therefore, I’m not sure who made the worse decision.