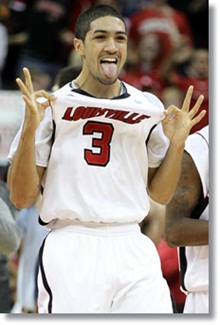 After surviving then actually thriving under the notoriously demanding Louisville head coach Rick Pitino for 3 years, big things are expected out of point guard Peyton Siva in his final year if the Cardinals are to live up to their likely Top 5 Pre-Season ranking for the upcoming NCAA season.

After struggling through injuries and limited playing time behind incumbent starter Edgar Sosa in his freshman season, the former McDonald’s All American has come into his own the last 2 seasons as one of the best floor generals and playmakers in the entire NCAA.

While Pitino is known for being especially demanding of his point guards, Siva seems to take it all in stride and has earned the respect and freedom from his legendary coach to be the maestro of the Louisville offense.  Remember Pitino now rather famously once told a former star player that he was going to “help him find another school to transfer to that doesn’t play defense.”

Last season Peyton became a national fan favorite after his heartfelt family story of how he once found his estranged father on the streets of Seattle, Washington minutes away from committing suicide aired nationally during the NCAA Tournament.  Peyton has since rekindled his relationship with his father and looks in tip-top shape heading into the 2012-2013 campaign.

Alongside dominating big man Gorgui Dieng, and a bevy of talented sophomores like Wayne Blackshear, Kevin Ware, and Chane Behenan along with senior sparkplug Russ Smith, Louisville should be as talent laden as any team in the nation, making them the odds-on favorites to win the Big East.

Check out Siva’s Amazing 360 Between the Legs Dunk:

Allen Moll has been a lifelong NBA and NCAA College Basketball fan who watches and studies games religiously, and coaches youth basketball in his native Lehigh Valley region of Pennsylvania.  Allen has also provided content to Bleacherreport.com, Upperdeckblog.com, Cleveland.com, CSN Philly.com, Buckets Magazine, ?in addition to being a tenured NBA and NCAA columnist for TheHoopDoctors.com.

Gregg Popovich in NBA 2K is a Sight to Behold