NBA Players to Face-Off in Goodman League vs. Drew League 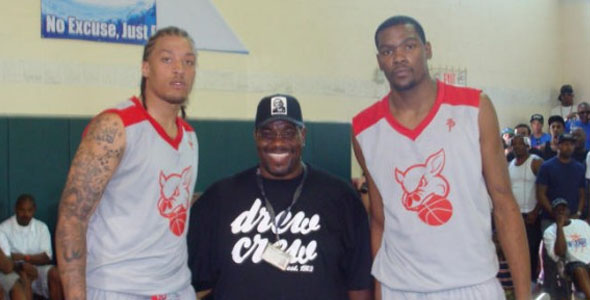 Due to the NBA lockout, there will be no Summer League. Correction: there’s no NBA-issued Summer League. Throughout much of the summer thus far, some NBA players have been keeping busy by participation in other leagues: Los Angeles’ Drew League and Washington DC’s Goodman League, to name a few. They don’t get the national exposure that the NBA Summer League gets, but if nothing else, it makes for good basketball. In DC on August 20, representatives from each of the aforementioned leagues will face-off for bragging rights in what should be a very competitive game.

There have been countless highlights from each league so far this summer where NBA players have really shown out. Previously we told you that James Harden dropped 51 in a Drew League game, and John Wall had 41 of his own in a Goodman League game, while being taunted by Julius Hodge at one point during league. There was also a 51 point outburst from Brandon Jennings in the Goodman League as well.

Pro-Am summer league’s certainly are not new, but this game is a bit different. Due to the names involved, this game has gained alot of attention and has already been nicknamed, “Capital Punishment”. In fact, it may be televised on ESPN.

With the game set for August 20, naturally, that means the rosters have been announced.

To give you an idea as to the level on competition, some NBA players that participated in the leagues were actually left off the rosters, such as Baron Davis and Shannon Brown, to name a few.

Based on the names above, I’m leaning towards the Goodman League winning this game, but wouldn’t be surprised if Drew pulls it out.