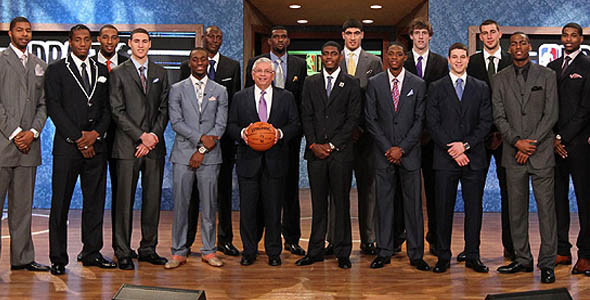 As is always the case with draft day, a bunch of trades went down during the draft in order for teams to move up or otherwise improve their roster. With the draft being relatively weak this year, teams had to be cautiously optimistic in the deals they were looking to pull off. Here are all of the transactions that took place yesterday and the winner of each deal.

Winner: The Mavs are the winner in this deal because I think Felton and Miller are a wash. Sure Miller is much older, but his game is so methodical that age hasn’t impacted his play. He’s been playing that same game since Utah (college, that is). Rudy Fernandez is a solid player who wasn’t getting much burn in Portland. This makes Dallas’ team much deeper and I’m sure they’ll play him.

Winner: The Bobcats look the best in this deal and overall had a solid draft. Biyombo is a beast around the basket and Maggette is the veteran presence that this young club needs.

Winner: I think the Rockets are the winners here. In this PG driven league, I believe Jonny Flynn can still be a very special player.

Winner: The Spurs are the winners here because Leonard does exactly what the Spurs are all about. He’ll roll up his sleeves and get dirty by defending, grabbing boards and blocking shots – all while not wanting to score. I’m confused by the Pacers in this deal. George Hill can potentially start in this league and they just dealt for Darren Collison last year. So when is Hill going to play? Doesn’t improve their roster.

Winner: The Nets are the winners here. Marshon Brooks has been tabbed “the next Kobe Bryant.” While that’s both premature and foolish, I will say that his movements on the court do have somewhat of a Kobe feel. Does that alone mean that he will be Kobe? Of course not. But he did drop 52 in a game last year for Providence and is the perimeter scorer that Avery Johnson needs.

Winner: Clearly, the Knicks win this deal as they practically buy Harrellson from New Orleans. The Knicks had the 17th pick and I thought they would’ve taken Kenneth Faried because of his defensive intangibles. But they didn’t. While Harrellson isn’t as athletic as Faried, he certainly fills a need. He led the SEC in boards last year and can alter shots around the basket. Definitely helps in filling the Knicks’ biggest need.

Winner: The Heat walk away winners here. The fact that Cole was taken in the first round from Cleveland State (even in a weak draft) means he can ball. He was a gifted collegiate scorer and could eventually provide a spark off the Heat bench.

Winner: I’ll always assume the team who actually got a body in the deal, rather than cash, is the winner. But here, it was close. Tyler’s gamble of skipping his senior year of high school to turn pro in Europe was a risky one. He was taken in the 2nd round which means his contract isn’t guaranteed and could get cut (new CBA notwithstanding). I’ll give the Warriors the slight edge here in a photo finish.

Winner: I don’t see Harper playing much of a role in Orlando. But for the Cavs who are rebuilding, these picks may workout for them ultimately. Cleveland is the winner here.