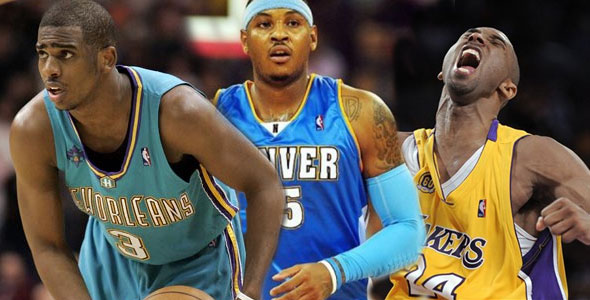 Except for leading your respective conference to victory, there are no clear guidelines for winning the All-Star MVP. When you have the best basketball players in the world all playing in one game, any player is certainly capable of taking home the award. With that being said, which Western Conference All-Star has the best chance at winning the MVP award this Sunday in Los Angeles? Let’s go to the power rankings.

To the delight of NBA fans, Love was named to the All-Star team to replace Yao Ming. Kevin Love is averaging a league best 15 rebounds a game. In addition, he is leading the league with 49 double doubles. However, unless Love has another 30-30 game it’s hard to imagine the first time All-Star winning the game’s MVP award.

Gasol is making his third straight and fourth career All-Star appearance. Gasol is averaging 18 points per game, and he is in the top ten in blocks and rebounds. While Gasol’s skill set is just as impressive as any other All-Star, he lacks the killer instinct to outshine the other players enough to win the MVP award. Not to mention, it’s rare for post players to take home the award.

Statistically, Duncan is having one of his worst seasons. On the other hand, the Spurs are boasting the league’s best record at 45-9, and Duncan’s leadership and crafty play has a lot to do with the impressive record. It would be nice to see Duncan take home the award in what could be his last All-Star Game.

Westbrook is making his All-Star debut in his hometown of Los Angeles. Westbrook’s numbers this season warrant a double take. The third year player is averaging 22 points, eight assists and five rebounds. This will be the first of many All-Star games Westbrook will take part in.

Griffin is not only taking place in All-Star weekend as a Western Conference reserve (the first rookie to do so since Yao Ming), but he is also taking place in the Slam Dunk Contest and the Rookie/Sophomore game. Needless to say, it could definitely end up being Blake Griffin’s weekend. While he is a lock to win this year’s Rookie of the Year award, winning the MVP award in a star studded contest won’t be as easy.

Ginobili is making his second career All-Star game appearance. Thankfully for Spurs fans, Ginobili has had a clean bill of health this season. Therefore, the Spurs are looking like championship contenders once again. The Spurs go as Ginobili goes. He does not seem like a likely candidate to win the MVP, but with his ability to hit big shots in the clutch it’s hard to count Manu out.

Nowitzki is making his 10th All-Star appearance. While Dirk can score with the best of them, his game is similar to Pau Gasol’s in the sense that he does not have the fire to outshine his All-Star teammates.

Williams has received some unfair scrutiny this past week for being blamed for Jerry Sloan’s resignation. With all of that put aside, Williams is arguably the game’s best point guard. He could be a sleeper to take home the award.

Durant is headed towards his second straight scoring title this season. He is leading all players with 29 points a game. The Durantula definitely has the scoring ability and leadership to take home the MVP award in only his second All-Star appearance.

After spending a good amount of time last season nursing injuries, many fans seemed to forget that CP3 is still the best point guard in the league. He has everyone remembering how good he is this season as he has the lead the Hornets back to respectability. What makes Paul so dangerous is he is able to dish out 15 assists and/or score 30 points.

Unfortunately, much of the attention Anthony has drawn this season has not been because of his basketball accomplishments. Despite all of the trade drama, Melo is still one of the best pure scorers in the league. Anthony may use all of the frustration concerning the trade rumors as motivation to go on a scoring rampage and win MVP honors. Keep an eye on Melo Sunday night.

That’s right, the Black Mamba gets the top spot. Forget the fact that he is one of the most talented, competitive players in the history of the league, and he is making his 12th straight All-Star game. Kobe is playing in front of his hometown fans. This is enough to give Kobe the nod for the top spot in the power rankings.