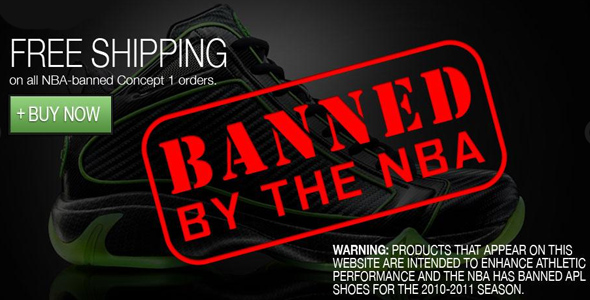 Remember the Reebok Pumps that were supposed to allow you to jump higher? Dee Brown of the Boston Celtics did a good job of selling that during the 1991 Dunk Contest when he pumped them up before a dunk attempt, creating the illusion that he was really aided by them. While those shoes didn’t really help Dee at all, there are some shoes that actually could help Dee if he’s still interested. Athletic Propulsion Labs’ Concept 1 sneaker, which is equipped with its Load ‘N Launch™ Technology, claims to add at least 3 inches to your vertical leap. Too bad we won’t see how this impacts the league this year, because the NBA has banned their players from wearing these shoes this year to prevent any competitive advantage.

Athletic Propulsion Labs found out that they would not be seeing their new shoes worn by any NBA players by way of notification from the league. A league official stated:

“League rules regulate the footwear that players may wear during an NBA game. Under league rules, players may not wear any shoe during a game ‘that creates an undue competitive advantage (e.g., to increase a player’s vertical leap).’ In light of that rule…players will not be permitted to wear the APL shoes during NBA games.”

I have a tough time believing that any NBA player would actually want to wear these shoes to boost their hops. You would think that they would want to dunk on guys, or block shots based on their own merit. However, that’s not the case because before the ban, Concept 1 caught the eye of more than a few NBA players. A slew of rookies actually tried out the shoes in events not related to an NBA function, wanting to see for themselves if the claims of an additional 3.5″ to your vertical leap were true. The company’s claim is that they add to a players leaping ability because of “the Load ‘N Launch device implanted in a cavity of the shoe’s forefoot which serves as a ‘launch pad’ by taking the energy exerted by the player and increasing lift with the aid of an intricate, spring-based propulsion system,” as described by Athletic Propulsion Labs.

This is the closest thing I’ve heard to a performance enhancing drug scandal in basketball. While not a steroid or drug by definition, if their claims are in fact true, they would enhance performance and I think it’s a good thing that these shoes were outlawed. It’s even prompting other bloggers to start talking about the Top 10 Unfair Advantages in Sports when it comes to equipment. The last thing the league needs is controversy around sneakers of all things. With this not being an issue, the playing field will be level so we don’t have to concern ourselves with who in the league is wearing them and who isn’t.

Here at TheHoopDoctors.com, we just assessed whether or not the dress code had a positive impact on the league, five years later. While the dress code banned a variety of types of of clothing, this adds to the list of what players cannot wear. Those God forsaken tights are another, thankfully. But news of this ban didn’t come as a shock to Athletic Propulsion Labs. In response to the news of the ban by the NBA of the $300 shoes, Co-Founder, Adam Goldston said, “We were not exactly shocked to hear the NBA chose to ban our shoes. The Load ‘N Launch Technology not only provides an instant and dramatic increase in vertical leap, but the biomechanical testing showed that the players exerted far less energy as a result.”

Doesn’t sound like he’s broken up by the news at all, does it? I wouldn’t think so, as shortly after the news broke that the NBA had banned the Concept 1’s, Google Trends had lit up huge with the search words ‘Athletic Propulsion Labs’ and ‘Concept 1 Shoes’. The company’s website server was barely hanging on, as thousands of aspiring athletes were logging on to order the outlawed shoes. The sales numbers are not yet known, but my guess is that this NBA ban on their shoes could be the best thing to ever happen to Athletic Propulsion Labs. Talk about a marketing pitch being handed to you.

The NBA is set up nicely to quite possibly have their most successful season ever in light of all that has happpened this summer. Potential controversy over a sneaker allowing you to jump higher would’ve unnecessarily taken attention away from that. This is the first time in the 64-year history of the NBA that sneakers have been banned due to the enhancing of performance. There is a first time for everything and a good call by the league, evein if they just made a marketers dream come true. More photos after the jump… 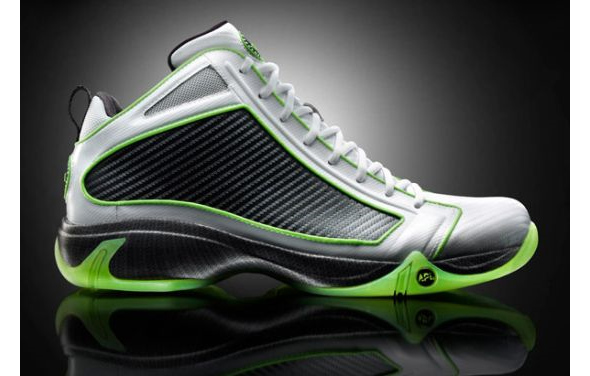 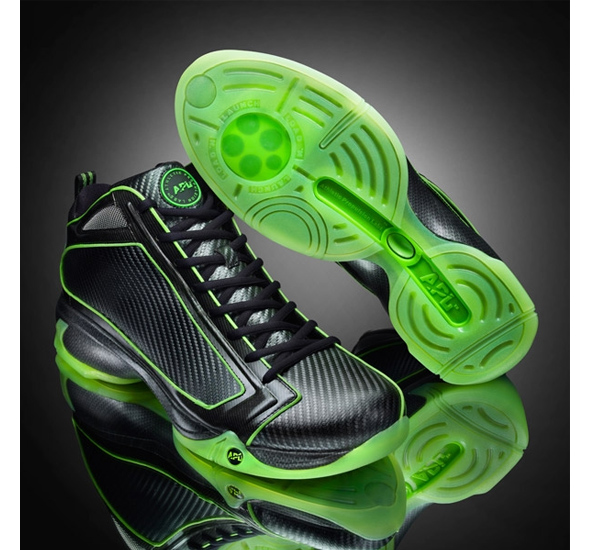 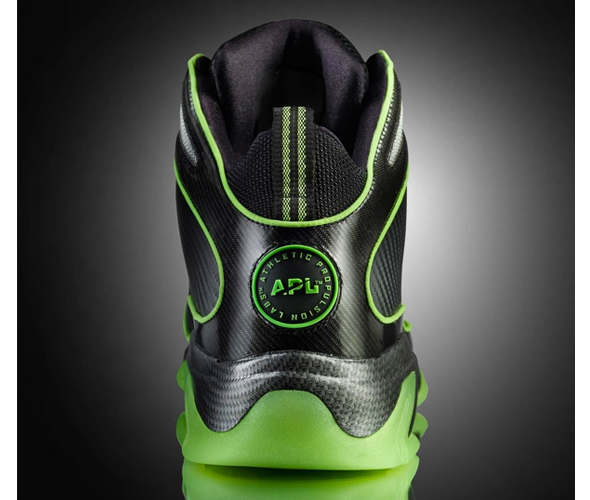