Greece and Serbia Get Into Bench Brawl; Krstic Gets Arrested 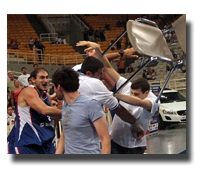 International basketball has long been known to be a bit more physical than the NBA. Well that physicality turned into an out and out melee in an exhibition game this week between Greece and Serbia in preparation for the upcoming World Championships in Turkey (August 28). NBA big man Nenad Krstic has always been a fairly mild mannered player in the NBA, but in this fight he goes nuts. He starts off by punching and choking multiple players in the scrum of the fight, only to eventually back pedal (a-la Carmelo Anthony) as Sofo Schortsanitis from Greece gives chase. Near the end of the brawl, Krstic picks up a courtside chair and throws it into the crowd of Greek and Serbian players. Which as you can imagine, ulimately got the big man arrested. He has since been released: