Should Shaq Still Get His Number Retired by the Lakers?

With 15-time All-Star Center Shaquille O’Neal joining the defending Eastern Conference champion Boston Celtics, what does that mean for his legacy as a Laker?  Many fans in Los Angeles have suggested that the Lakers should not retire his number.  Others, and radio hosts, have argued that his number be retired.  No matter where you fall on the issue, Shaq’s “place” in Los Angeles Lakers’ lore is somewhat uncertain.

The Lakers only retire numbers of Hall of Fame players. 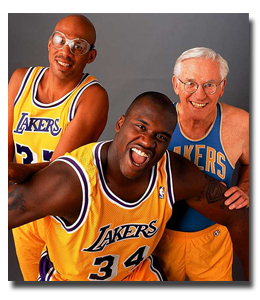 All-time, O’Neal will go down as one of the best big men in NBA history.  O’Neal is 2nd in field goal percentage, 5th in scoring, 7th in blocks, and 14th in rebounds (12th by early next season).

But, first it will be Shaq’s turn.

Shaq falls behind the great Jabbar and Chamberlain in all-time scoring, Wilt 4th and Shaq 5th.  Shaq trails only Jabbar in blocked shots.  To his credit, Shaq (2nd) has a higher field goal percentage than any retired Lakers’ player with 58.1% (Jabbar 10th and Chamberlain 22nd).

I believe there is absolutely no question, then, that Shaquille O’Neal deserves to be both in the Hall of Fame and get his number retired by the Los Angeles Lakers.

What no one can really control is how the people of Los Angeles will perceive Shaq.  There have been so many factors over the years:

Clearly, the Lakers should retire O’Neal’s number.  But, that does not mean that all is forgiven in Lakerland.  Fans and the organization will always hold a grudge against Shaq for his post-Laker behavior and negative comments against the organization, it’s owner, coach, and star player, Kobe Bryant.

By the way, Shaq, that “side-kick,” who you once called “a joke,” Kobe Bryant, has earned himself something Shaq will never have—a statue outside the Lakers’ gym.

Now, O’Neal’s latest violation of joining the Boston Celtics has certainly poisoned the well even further, but he should be safe from Laker-fan-fire unless he should be so lucky as to win a title with the green team.

So, is Shaq worthy of the…

Lakers and Lakers’ fans fawning all over Shaq, again?

Not going to happen

(except for a few moments during the ceremony).